I am an avid fan of Project Runway. I love watching how the most extraordinarily creative garments can be created in the least amount of time imaginable. (I mean, a day and a half to create a ball gown?!? Come on!!)  And those people can really sew!  And they actually manage, most of the time, to produce the most stunning and well constructed dresses, pants, jackets, and do-dads.

This season there seemed to be a real divide between designers who had gone to design school and those who were self-taught.  The most apparent was the bias that those school-trained designers had against the self-taught designers. (I’m looking at you, Ivy, April, and Gretchen.)  It was assumed that if you hadn’t gone to a Real School you weren’t/couldn’t be/shouldn’t be allowed to be a Real Designer.

I’m feeling a little defensive about this because I am mostly self-taught. The only sewing instruction I’ve ever had was during 8th grade Home Ec with Mrs. Stevenson.  Mrs. Stevenson was clearly insane. She wore Christmas tree skirts as real, actual skirts. And she wore them often during the holiday season, but broke them out for other festive occasions as well. Like Valentine’s Day.  She wore a wig very badly – complete with long hairs that occasionally peeked out from underneath. And she constantly lost her reading glasses up there, too. When my friend Susan was caught red-handed chewing gum in her class (a bug, huge no-no), Mrs. Stevenson believed her when Susan claimed to be only chewing on her tongue.

And this was the woman who taught me to sew.

I did witness my own mother occasionally put needle and thread together to mend my father’s jeans, but that only taught me (A) that jeans are not worth mending and (B) that sewing must include a lot of swearing.

Would I be “better” if I took some classes?  Probably. I would learn some new things, techniques, short cuts.  But does taking classes make me a Real Designer? No. It is the combination of the desire to create, energy to educate myself in whatever way works for me, and the talent to do it that makes me a Real Designer. 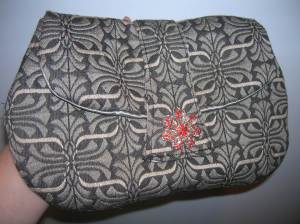 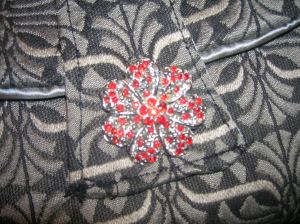