When we arrived in Basel the BIS gave us a whole “Welcome to Switzerland!” packet of information. In it was the book Family Fun: A Guide to Outings In and Around Basel.  Mark has been religiously paging through it on a regular basis, plucking various day trips and excursions from its pages.

This weekend he picked page 23: Schloss Lenzburg (or Lenzburg Castle).  Lenzburg is about 40 minutes away by train and if you forget to get off the train you end up in Zurich.  We of course took the train, “the last civilized form of travel,” and walked from the station into the Old Town. 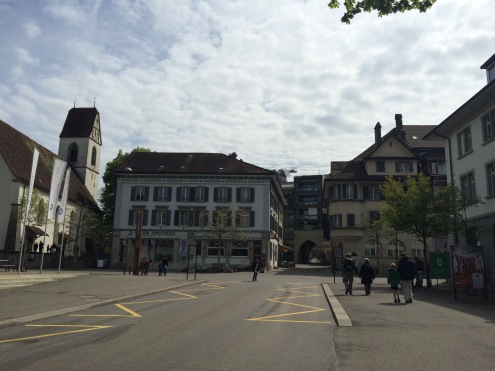 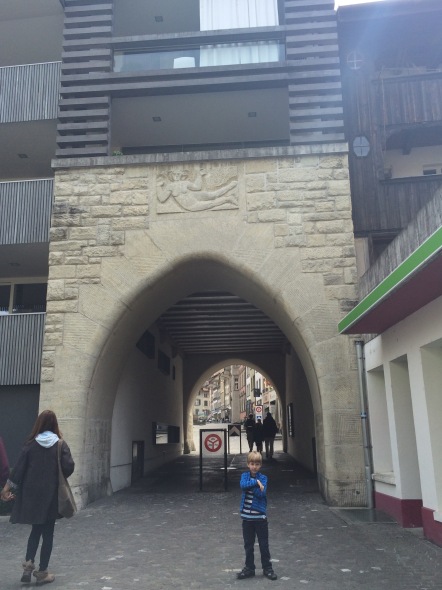 Luckily, there were some cafes open on this Sunday and we enjoyed sandwiches and flammenkuchen at tables in the plaza. (Flammenkuchen is a very thin pizza that is a delicacy in the Alsace Region.  It has creme fraiche instead of tomato sauce and is topped with Alsace ham and Gruyere cheese. It’s absolutely delicious.) 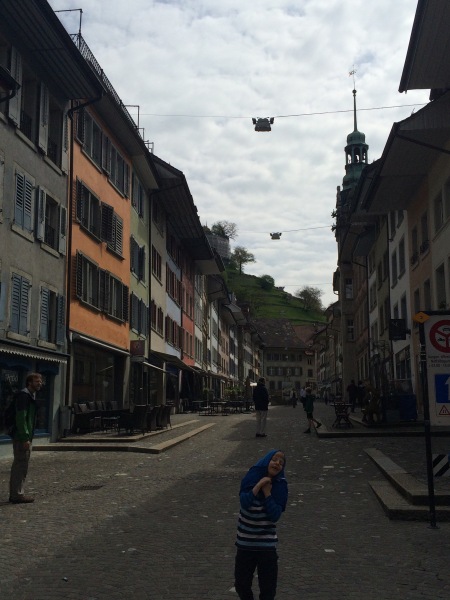 The plaza had interesting things to look at and for the kids to explore.  Like a wooden bench carved into a dragon, a flower seller’s displays, and a 19th century fountain. 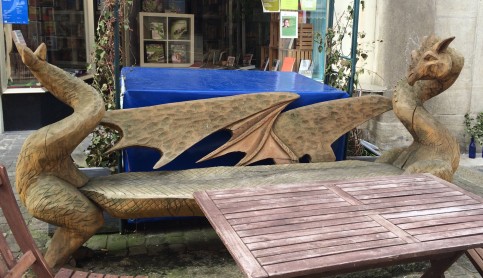 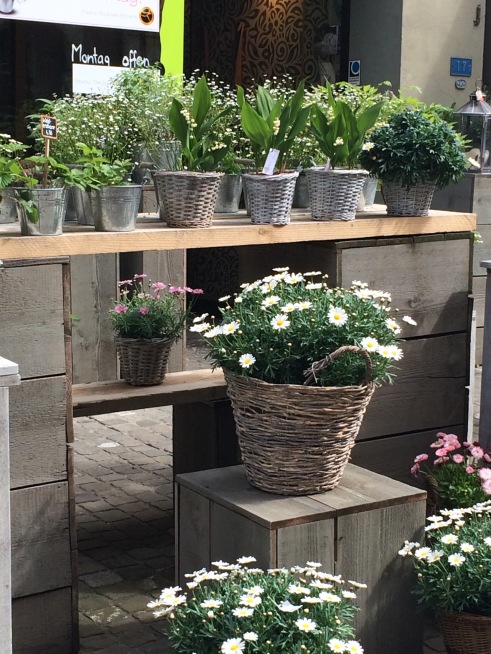 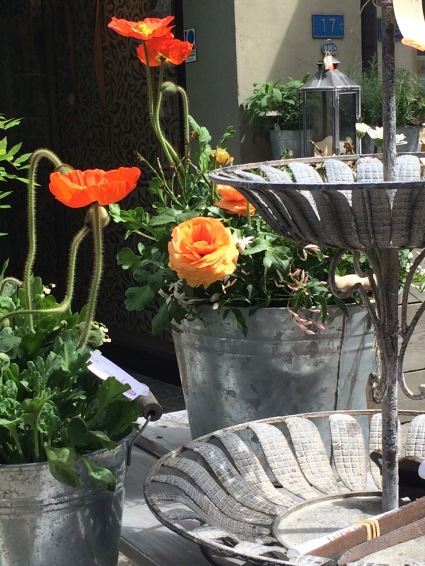 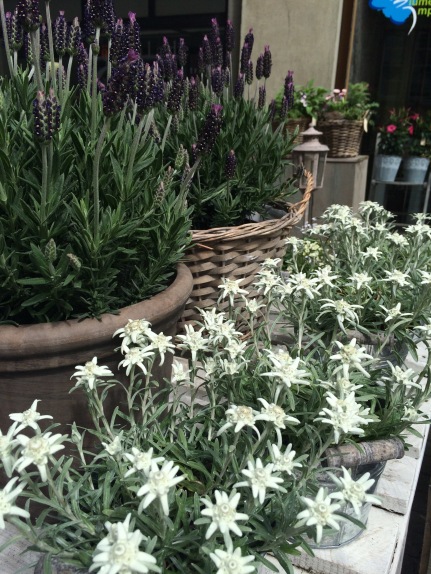 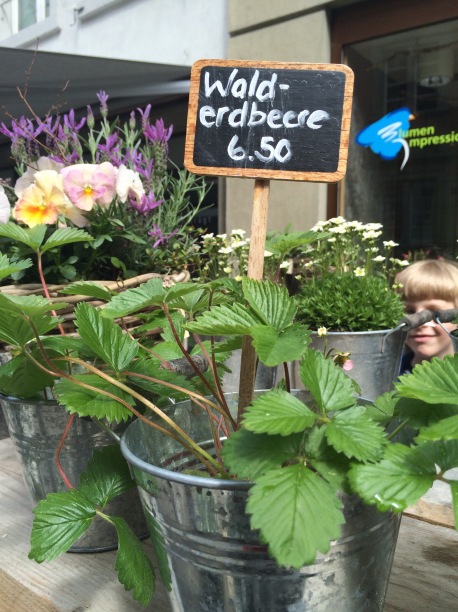 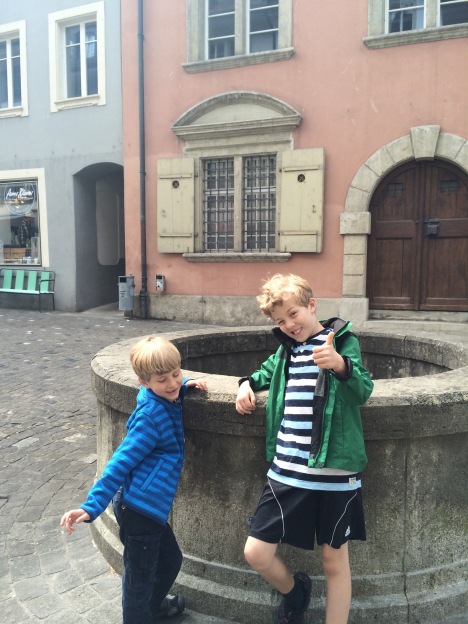 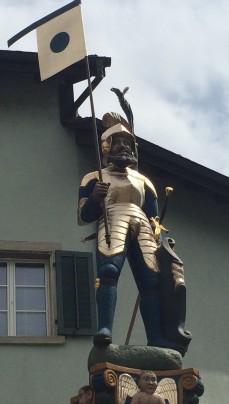 The kids peeked around the corner and found this guy. 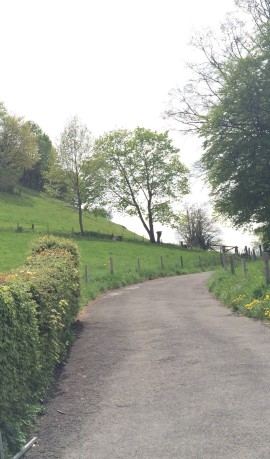 Full and refreshed we hiked up a steep cobblestone street and onto an even steeper path.  And if you didn’t get enough “steep” you could take the stairs. (One of two sets!) 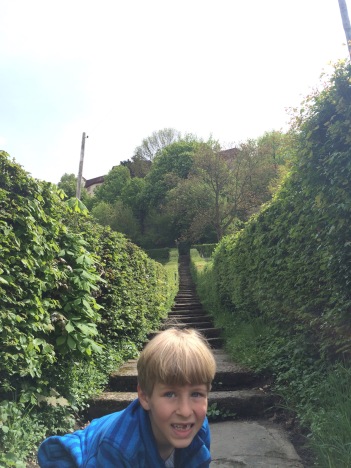 The hike was worth it.  The views of the castle were incredible!

H was impressed by the castle gate. First built in the 14th century and then improved in the 1620s.  I can imagine the conversation. “Man, this is 300 years old. We should probably fix it up!  Too bad This Old House hasn’t be invented yet.” 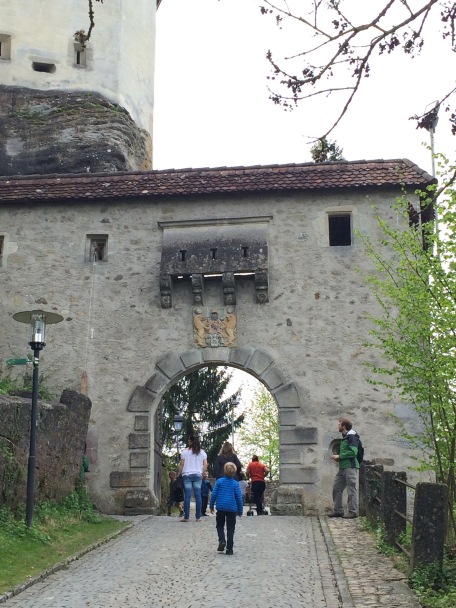 The central portion of the castle is very, very old. Like built in 1000 AD old!  This tower is closer in age to Christ than to me. 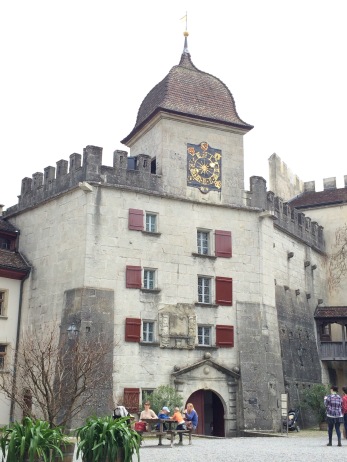 Lenzburg Castle was built by the Counts of Lenzburg – two knights named Wolfram and Guntram. Legend has it that they slew the fierce dragon that lived in a cave on the hillside.  The people of the village below that had been terrorized by the dragon were so grateful they made Wolfram and Guntram the Counts of Lenzburg and let them build the castle on the hill.

Actual documents, however, say that Ulrich a Count of Aargau, and overseer of the area of the Emperor, held the castle in 1036AD.  It was passed on down through his family until Ulrich IV died without a male heir in 1173AD.

Ulrich IV was quite a guy.  Apparently charismatic and friends with lots of other nobles and kings, like Louis VII of France and Konrad III of Germany.  He not only went on the Second Crusade, he also convinced Konrad that it wasn’t such a bad idea and that he should really support the Pope on this.  He, Konrad, Louis and his personal friend, Emperor Frederich I Barbarossa, all went crusading together and he named the Emperor as his heir in his will. 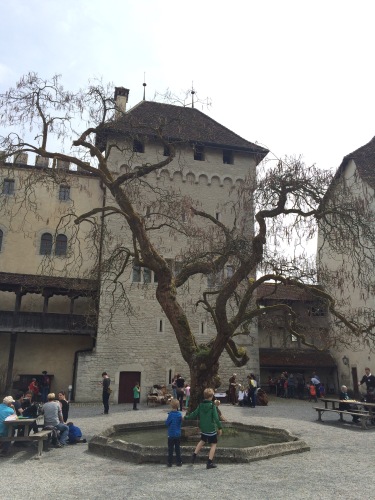 Lenzburg Castle then goes through a whole bunch of hands including the Counts of Kyburg and then it finally gets into the hands of the Hapsburgs in 1264. It almost became English property through marriage in 1344 – the Knights’ Hall was built just for the wedding – but the groom died before the wedding could take place.  But the Hall has seen many weddings since.  Anyone interested can rent it for weddings or private parties. 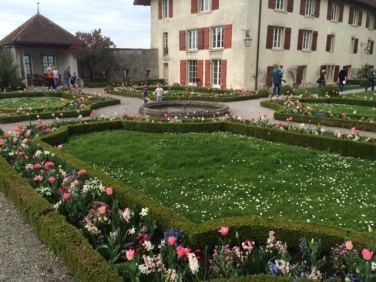 The gardens are a wonderful spot for wedding pictures and anniversary cocktail parties.  Or just for quiet contemplation with a nice cup of tea.

In 1415, the Bernese went to war over Frederick IV Duke of Austria’s assistance to Antipope John XXIII. They seized Aargau and the area surrounding Lenzburg Castle.  The Castle, however, battened down the hatches and was untouched.  And, frankly, if you were a knight in plate armor and you looked up the hill and then saw the rock the castle was built on you’d pass by it, too.

That rock face it at least 30 feet tall! And it hangs over the path!  That is a horrible thing to face when you know you can’t possibly climb it.  Instead, the Bernese spent the next 40 years buying up the ancestral rights to the castle estate until they finally owned it all.

It was the home for the Bernese bailiffs for over 300 years until the French took it in 1798.  In the 1800s the castle was sold and spent the next 150 years in private ownership.  Finally, it was turned into a public museum and school children from all over Switzerland travel to the castle to learn more about their history. 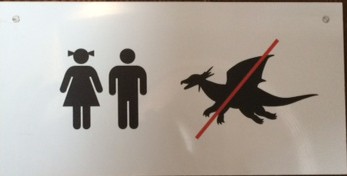 The curator of the museum has capitalized on the long history  of the castle and has filled it with exhibits that ranges from Middle Ages dungeons and living spaces to Renaissance bedrooms and Rococo sitting rooms and kitchens. 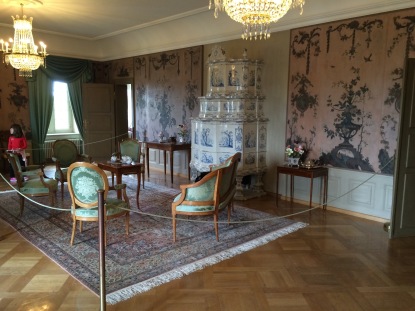 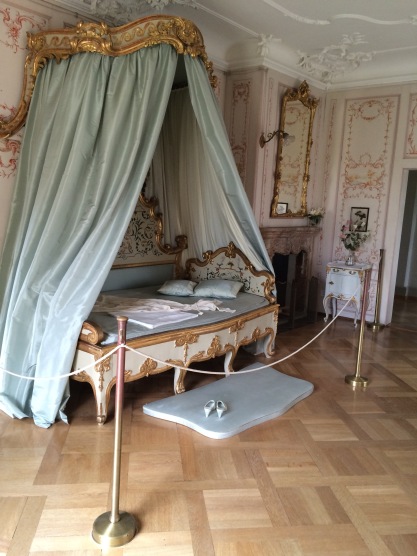 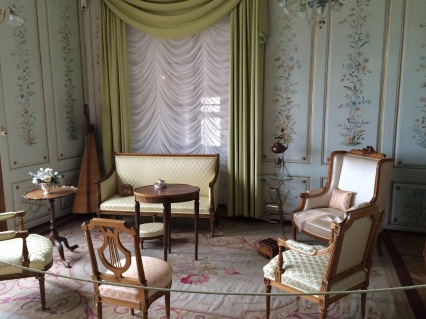 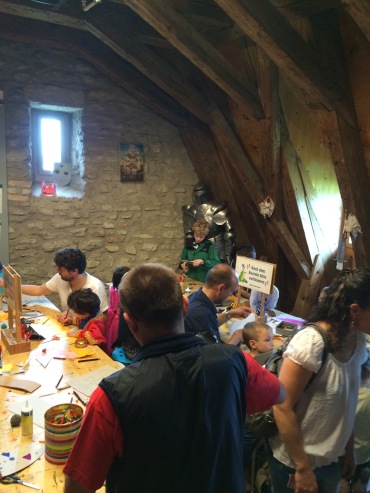 The boys’ favorite parts were the dungeons (obviously) and the kinder play area at the top of the tower. The kinder area was full of children.  Huge tables held materials to make crowns, swords, and shields.  There was a castle play tower, chests with dress-up clothes, puppets, rocking horses, and a fenced area for toddlers.  There was even a ladder up to an attic reading room.  H disappeared up there for a very long time!

And because this castle caters to school groups and afternoons out with their parents they have a play village at the foot of the castle.  Wonderful log cabin playhouses each representing a different village shop or function.  H liked it very much.  E skipped it so he could scale the steep stairs.  I think he regretted his choice, but we promised we’d come back so he could play in the village. 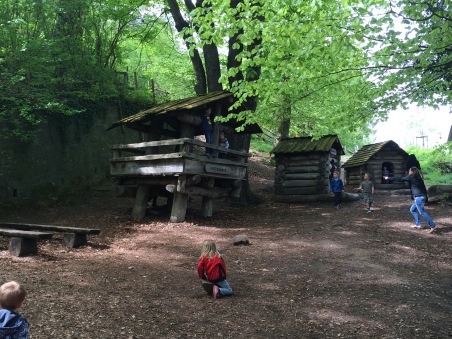 We’ve been to a lot of castles here in Switzerland.  Some in ruins. Some wonderfully preserved. This is the most thoughtfully preserved and presented. It takes you through practically the entire history of feudal Europe, the formation of Switzerland, the Crusades, the Reformation, and the first and second World Wars.  Like so many other places in Switzerland it gives the children a tactile experience with history.  They touch it, breathe it, and live it.  It is a historical marvel and I can see why the children in Basel take the 40 minute train ride to see it.  It should be on your family must-see list. 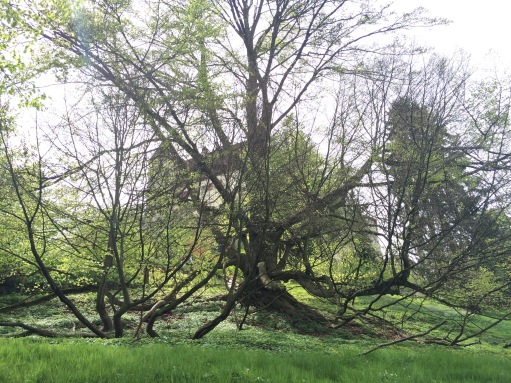 One thought on “The Swiss Family Carlson goes to Lenzburg!!” 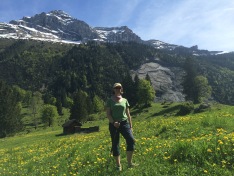