There are numerous other towns between Basel and Zurich in Switzerland located along the Rhein and its tributaries.  On Mother’s Day, we went to one of these little towns; the creatively named Rheinfelden.  In fact, you can boat up the Rhein into the North Sea from Rheinfelden!

Right across the river is Baden-Wurttemberg, Germany.  And, yes, we trotted on across the bridge to Germany just because we could.   Incidentally, these two towns were actually ONE town until Napoleon came over in 1802 and decided the border of Switzerland and German should be right along the river.  But the towns basically said “we’ll show you!” and they still sort of operate as one town.

If the name sounds sort of familiar, Rheinfelden is where we visited the Feldschlossen Beer Brewing company back in March.

People have been living there since THE STONE AGE. Augusta Raurica, the first Roman town in Switzerland, is not too far away either.  We visited there in September and E’s school took the entire 3rd grade there two weeks ago.  And I can see why.  It’s beautiful!  The river rushing by and the buildings look like some kind of set from The Barber of Seville or Romeo and Juliet.

Rheinfelden was part of the kingdom of Burgundy (just like Dijon where we were a few weeks ago) until 1330 when the city pledged itself to the Hapsburgs and became a part of Austria.  Through the 17th century (during and after the 30 years war), the city was almost constantly besieged by different forces: French, Swedish, German, Austrian, and Swiss.  Finally, in 1802, as Napoleon divided the city into Baden and Rheinfelden, the city of Rheinfelden decided to join the Helvetic Republic and became officially Swiss.

Rheinfelden is a city of architecture and art.  We found this awesome statue/fountain by the river.

The statue of the Mermaid saving the drowned girl was made in 2007 by Roland Kistner.  It seems to be a romantic warning about the incredibly strong current of the Rhine River.  I tried looking up information about the statue and I found this website.

The sculpture was created  in 2007 by Roland Kistner, and is based on one of the legends of the St. Anna Hole, a deep cavern in the bed of the Rhine River by the Old Rhine Bridge.   One of the legends has it that when the town was attacked by the Huns some centuries ago, the townspeople tossed all their valuables into the river to foil the plunderers.   In revenge the Huns threw the Lady Anna of the castle into the deep part of the river.  Where exactly the mermaid comes into play is unclear….

Nevertheless, the mermaid statue reflects the features a mermaid would likely have to possess to survive in this section of the Rhine.   The currents can be extremely strong, especially when there are flood waters.   The St. Anna Hole in the riverbed creates additional turbulence and unusual currents, which over the years have surprised many swimmers, at times with fatal results.

They even have science-y art!!  I was totally geeking out. 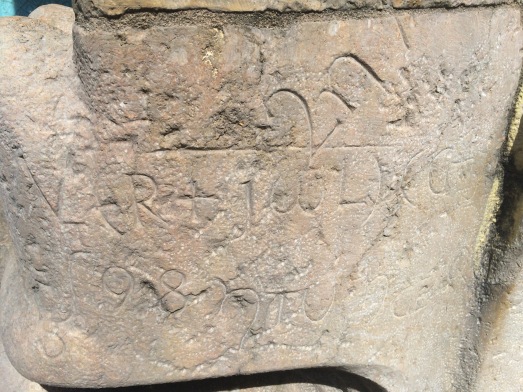 Rheinfelden is a great “walking around” town.  It’s small and cute and a good place to take visitors (we took Mark’s parents there as a little day trip).  And since it’s late spring we found a great ice cream cart in the market square.  The kids were super excited to suck down strawberry (E) and coconut (!H).  And then we wandered through a great park for kids, along a path next to the river, and over across the town to the Feldschlossen Brewery for and fabulous dinner with some well earned Frülingsbier (spring beer).

We have a long weekend coming up and, surprise!, we have a trip planned.  We are going to St. Gallen for a hike and possibly Lichtenstein!!

Also in awesome news, my sister in law is having her baby in a few days!!  I am so, so excited for her and for my brother.  Good luck, Michelle!  I will be thinking of you constantly this week. xoxo