A guest post from Mark!  For Mother’s Day I requested the gift of …. a weekend alone.  I just wanted time to myself and weekend where I could have some peace and quiet and time for myself.  As part of my gift, Mark took the boys on an overnight adventure to see the more military parts of Switzerland.  Here is their adventure.

Recently, the boys and I decided that we would go on an adventure to investigate more of the “prepared” part of the “neutral but prepared” ethos that permeates Switzerland. This involved going to the metropolis of Full-Reuenthal (population 818) in northern Switzerland and home to a two-part museum related to the military history of Switzerland (and other countries).

The first part of the museum is a seven story warehouse (plus annex) filled with weaponry. Part of this museum was simply for saying “look at this really neat stuff!”  The boys’ heads turned every which way trying to figure out which tank to look at first.

Most of these tanks had been used at some point by the Swiss Army, but there were some British, German, and US tanks included as well.

There were educational aspects to it as you could explore the inside some of the tanks to see where people sat and what conditions would have been like.  One of the rarer objects owned by the museum that really let you get a sense of this was the World War II King Tiger tank on the main floor that has been partly disassembled to be repaired and refurbished. We were able to see many of the mechanisms of the tank and the compartments for the crew.

Other parts of the museum were dedicated more specifically to Swiss military history. Those floors had various uniforms, such as recent Swiss military uniforms, historical Swiss Guard uniforms, and even historical ski soldier uniforms (completely white) complete with wooden skis.  The museum also had a history of heavy guns on display with one floor of the museum charting teh course from horse drawn cannons to early machine guns to mortars and anti-tank cannons.

Then there was the part of museum providing a bit of world military history through miniature figures in battle scenes. 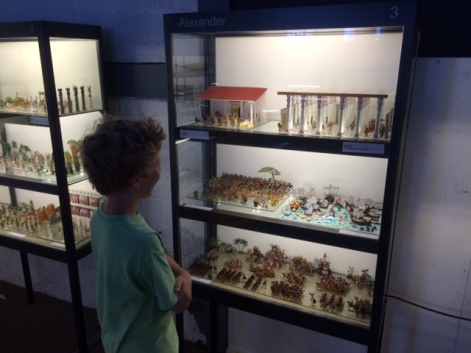 There were battles set up from World War I, the Franco-Prussian War, American Civil War, the 30-years war, Julius Caesar and the Romans, Alexander the Great, and (because the Swiss do have a sense of humor) a dinosaur battle featuring a Tyrannosaurs and a Triceratops.

The second part of the museum was even more interesting, at least for me. Part of the reason that this museum is in Full-Reuenthal is that it is on top of a sizable hill overlooking the border with Germany. As you are walking along a residential street in the town, you look to your right, and “Hey, what do you know!”

This tower looks just over the top of the hill. (We walked up that side of the hill, and the tower was really not obvious until you were very close.) It is the entrance to one of the largely underground forts that protected the border. We were told that construction started in 1937 and was finished in early 1939; three months prior to the start of World War II. This is astonishingly quick especially considering the size and the fact that much of it is 20 meters underground!

This fort was then part of the National Redoubt system that was intended to deter invasion; our brochure told us that there were 400 bunkers along the northern border and thousands more in the more heavily fortified Alp region. This particular fort was decommissioned in the late 1980s and turned over to the current private group of citizens that runs the museum.

We had a fantastic guide that gave us a tour of the tower. Parts of the tower were, of course, defenses, mostly machine guns that looked out the entrances and surrounding areas. Our guide even showed the boys how to operate some pretty serious machine guns, which earned him a special place in the boys list of awesome people. 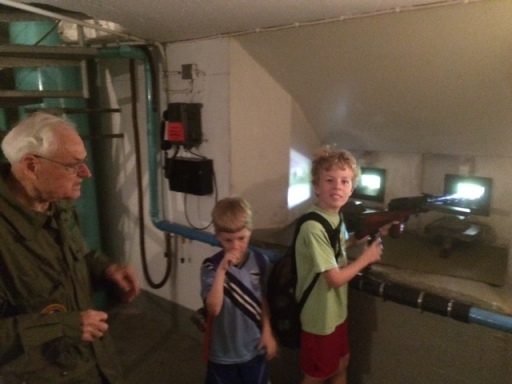 These weapons were going to be fired in enclosed spaces, the fortress designers had the foresight to include clean air breathing equipment. The soldiers would put on a gas-mask and hook the front end to a hose that brought them clean air (the blue tube in the picture carries the air and the hose can be seen hanging on the wall between the boys and the guide).

Much of the tower was devoted to observation areas to watch the border. Our guide pointed out that each area had a map of the terrain with numbers denoting certain reference points. Should the observer notice the enemy at any of these points, he would phone the command center. The command center would then phone the gunners. The gunners also had a map on the wall with the reference numbers and the settings to hit that reference point. Since the guns where located behind the crest of the hill, the gunners could position the gun and fire the shells over the top of the mountain without seeing the target themselves and, more importantly, without the enemy seeing where the shells were coming from.

After learning that, it was time to see the main weaponry of the fort. We walked down the main tunnel to get to the gun towers.

As you can see, the base goes on a ways (210 meters), making the construction speed that much more impressive. The grooves in the floor are rail tracks for the cart that would bring the ammunition from the magazine to the elevators that would bring it up to the guns.

After a bit we reached the tower and made our way up to see one of the main weapons – a 75mm gun with a range of a bit over 10km. It was quite something and the kids crowded around it. 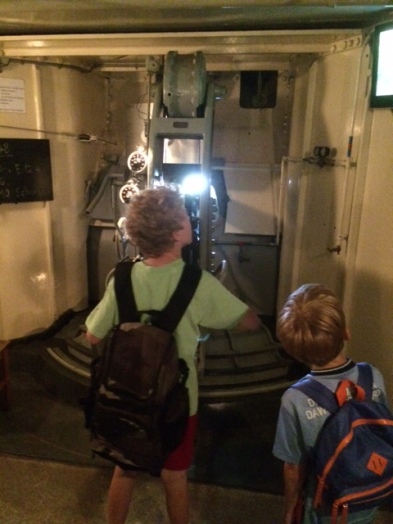 The black rectangle on the left is the map the gunner would use to position the weapon. There was even a movie (in English!) that explained the whole process from sighting the enemy to firing the gun. We were told that the guns were fired during the war period for “warning purposes” (Get off my lawn!) but were never called on to shoot at the enemy.

After that, we looked around the rest of the base. The personnel quarters were modest, but not unreasonable and cafeteria fairly spacious. Some of these rooms were set up to show what life was like. Others were devoted to guns. Lots of guns.

We were told that, at its peak, 160 soldiers were stationed there. It was fun to tour, but living underground for long stretches would be hard.

After looking inside, we looked around outside. The guns were fairly well protected by concrete housings.

For added camouflage, there were screens that raise and lower that would further hide the fact that there is a gun in the tower.

After that we were exhausted and it was time to head to the train to get to a hotel. On the way, we crossed a field with yet another bunker, this one not so hidden.

This military side a quietly acknowledged, but not publicized side to Switzerland. It’s just kind of there. Accepted, expected, but not a big deal.

One thought on “The SFC Men Go Military”