For over a year H has been begging to go to Denmark to the original Legoland. He’s only been begging for year because that’s how long he’s known there was a Legoland. We went to the one in Germany last year with Auntie Shaun and now it was time to visit the “original” Legoland.

Legoland is in the city of Billund, Denmark which is in the center of the country. We flew into Copenhagen and then took a train to Vejle (pronounced “val-lay”). Once we reached Vejle we took a bus 30 minutes to Billund.  The bus dropped us literally at the front gates of Legoland. We walked off the bus into theme song from The Lego Movie  blaring from speakers around the plaza.

This might seem like a complicated way to get to the theme park, but it gave us a chance to see what Denmark really looks like outside of any city.

Denmark is very much a country of renewable energy. They even have windmills in the sea!  (And that is the Baltic Sea, by the way…)

We saw a lot of people fishing in boats down in the water. It was just like every lake in Minnesota, except, you know, grander. And in the Baltic Sea.

It’s a lot of farmland with black soil that reminded me of where I grew up in Iowa. It kind of made me nostalgic.

There was lots of standing corn ready to be harvested. Hay baled and wrapped resting in the field.  Clumps of red Hereford cows chewing their cud in the field.

And then, before the boys could get too mind-numbingly bored, we were at Legoland! H’s holyland!

We were staying at the Legoland hotel that was actually connected to the park by an enclosed walkway. We had to walk around the edge of the park to get to the hotel, which was about a 1 block walk. When we opened the doors we walked into a wonderland!

Boba Fett and R2-D2 greeted us.

As did this dragon!

Check-in could not have been easier. We quickly found our pirate themed room, oo-ed and ah-ed over the Lego monkey hanging outside our window, fawned over the small Lego packages the hotel left on the boys’ beds, and then went back out to see even more awesome Lego things.

The hotel had lots of areas for the kids to play in. There were bins of Legos, a foosball table, a giant Lego firetruck with a movie playing inside (next to the bar area a/k/a the parent play area), and a Nintendo game area.  There was even a play room in the back of the dining room so parents could enjoy their dinners and let the kids go off and have fun!

And the dinners and breakfast were amazing. Totally delicious and a huge variety of different cuisines, from paella to orange chicken to southern BBQ. And spaghetti and chicken nuggets on a buffet right at kid height.

Just a note: I can’t compare this to Disney – it has been so long since I’ve been there and I didn’t go as a parent, so if you want to compare them please comment in the comments section below. I am curious to know how they do compare.

We got a handy brochure about Legoland with some sage advice to parents. The first of which was “Write your phone number on their arm so if they get lost it’s easier to find you.”  That is actually great advice and I might just do that on a daily basis here for the rest of their lives. Another was: “Make arrangements for a time and place to meet and then let the kids go off and explore on their own.”  Terrifying, but we did specify a meeting place in case we got separated. Our decision to stay together was mostly because half the fun for us was to see how much fun the kids were having.

And who wants to miss a face like this?

(My mom asked me what the stuff splattered on the seat was. I responded that it was the blood of his viking enemies.)

As you can see everyone was unharmed and mostly dry from the Viking Flum Ride. Thankfully they full-body drying units right around the corner after they disembarked from “Asgard Station.”

The park was large, but not so large that you can’t possibly see everything. We were there for 2 days and, really, we felt like we could have used part of a 3rd day.

One reason was that we found a couple of rides we just fell in love with. One was the Egyptian Tomb ride, which was really more of a laser light shooting gallery. E and I were unstoppable.  Another was the cute Duplo plane ride. H went on it about 6 times. E went along as moral support – only. Really. I’m sure he didn’t enjoy it at all.

Legoland makes for a very low-stress family vacation. The foods are all things that kids and adults would like. No one is pushing or shoving or yelling at the kids. And since we went in the fall the lines were nonexistent.  Plus the rides were all good fun! 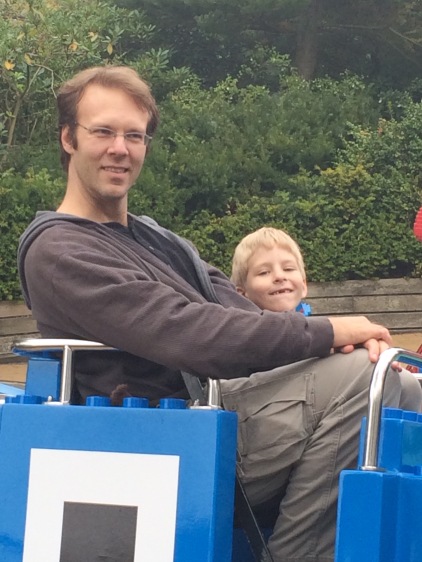 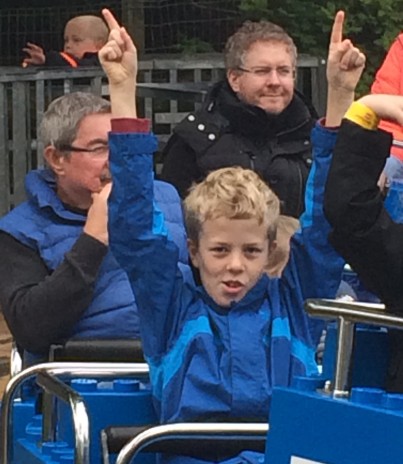 It wasn’t all rides, though, which was kind of a relief.  Just like in Germany they have a large area of Lego mini-worlds. They have realistic models of cities of Europe and major world-wide landmarks.

Some were very unexpected, like these two things in the Legoradeo Town. I had a pulled pork sandwich that tasted more like it had been marinated in a pot of chili than barbecue sauce.

And they were in the beginning of their fall/Halloween extravaganza decorating. They had some up and a haunted house was a special ride there for the season.

When we left we saw massive boxes filled with pumpkins all over the park. The park was closing for the two or three days after we left just to continue decorating for Halloween.

And they also have this!

This is a full-sized Star Wars X-wing fighter made entirely out of Legos. It is amazing. They even have a smoke and light show with audio clips from the movie. H was spellbound.

He wasn’t the only one who was pleased.

Legoland also has an Atlantis exhibit which is actually a moderately sized aquarium.  They have a large tank with Lego deep sea divers hanging out with sharks, manta rays, groupers, and other tropical fish. 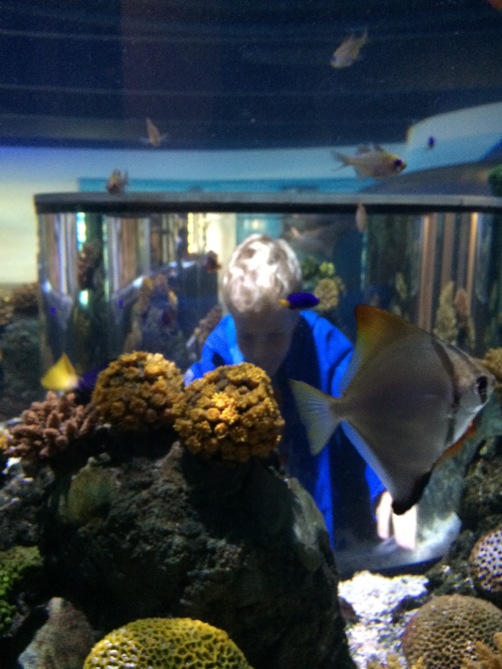 They also have this great starfish tidal pool exhibit. There is a person there who can help you handle them if you want and answer all your questions.

You have to watch your step when you leave… sharks are everywhere!

If you escape from the sharks you run smack into a group of pirates! 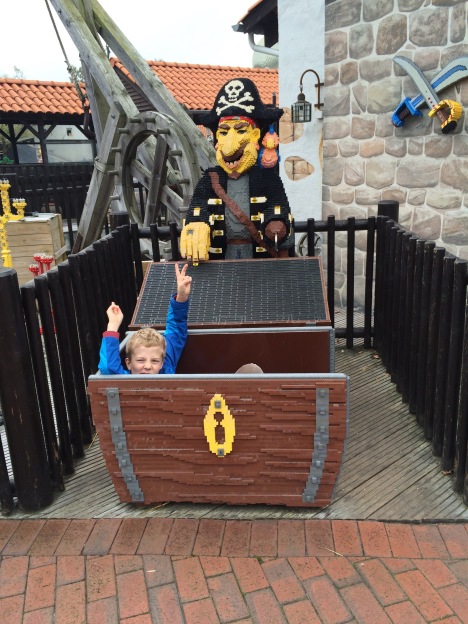 But thankfully we were rescued by knights.

The boys (all three of them) gave Legoland 1000 thumbs up.  The two youngest pleaded with us to extend our stay just one more day.  I also, as not quite as large a fan of Legos, had a wonderful time. It was as low stress as a vacation can be, especially one to a theme park.

And I would go back in a hot minute.

After we left we went back to Copenhagen and stayed there for three days. It was a blast and there is so much to write up. Expect a good 2 or maybe even 3 posts about that, with lots of pictures!