Oh my goodness, Seville has been grand. We’ve seen palaces, cathedrals, plazas, fountains, and very narrow streets. As we leave Seville we dined on more tapas, saw a bullfighting museum, and had a carriage ride through the city and the gardens.

Let me get right into the tapas. I am now a true lover of tapas thanks to Cafe Tomate.  Cafe Tomate is a small tapas restaurant among all the other tiny tapas restaurants up the street from the Cathedral. There is room for about 10 tables inside. The front room is dominated by a bar crammed with bottles of Rioja and a leg of Iberico ham.

It doesn’t display legs of ham over the bar like El Rinconcillo, but just like every other tapas place they do have their Iberico ham right on the bar. This is our waiter. He got our plate and this really long and thin carving knife and started to slice paper thin bits of ham off the leg.

We had to order two plates because the boys descended upon the first one and hoovered it up like they’d never seen food before. It was delicious. I still dream about it.

(Dear Dad, For Christmas I would like you to raise two of the pigs solely on acorns and then cure it with salt. We need to hang it in a bodega for 2 years, but I think I can wait that long. We could open a shop like this one… Here’s a website so you can read up on it.  http://www.jamon.com/curing.html)

And of all the things we had beside the ham, these little bits below are the best things we ate. 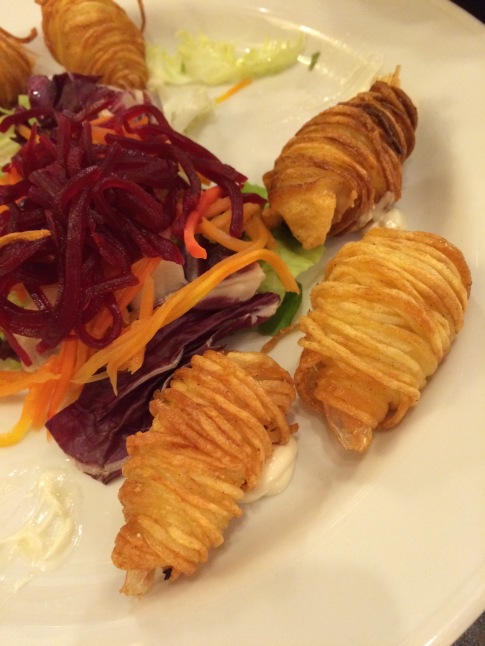 They are shrimp, dipped in batter, then wrapped in very thin strings of potato, and fried. They are sitting on tiny dots of aioli. I wish I could figure out how to make them, but I think they are a bit beyond my skill level.

We also had patatas bravas – crispy potatoes covered with aioli and a red slightly spicy sauce – and the boys wolfed those down, too. This is quite something considering my kids don’t like sauces.

Dinner took about two hours. The boys were exhausted by the time it was all done and we practically had to carry H back to the hotel. We had a slow morning the next day and decided to go on a nice carriage ride and then go through the Bullfighting museum.

Finding a carriage was no problem. They are everywhere! In front of the Cathedral, by the City Hall, and at the Plaza de Espana to name just a few.  For €48 you can pick out a likely-looking horse and driver and hop in.

Our driver spoke only Spanish. My Spanish is incredibly rusty and mostly consisted of medical instructions (Déle a su perro el medicamento dos veces al día) and ordering food (Me gustaría una torta de pollo con guacamole, pero sin crema), but I got the gist of what he was telling us and was able to pass on the information to the rest of the family.

The ride was lovely. Clip-clopping along through the cobblestone streets we were able to see lots of beautiful sights that we hadn’t seen during the rest of the trip.

It was nice slow ride around the city. We could revisit some of our favorite things and catch glimpses of things we would have otherwise missed.

This was Maria Luisa’s Park. These used to be the gardens of the Palace of San Telmo. Maria Luisa donated it in 1893 to be used by the public. This is where the Ibero-American Exposition of 1929 (a World’s Fair) was held. There are lovely pavilions all around it that are now used as museums and other public buildings. 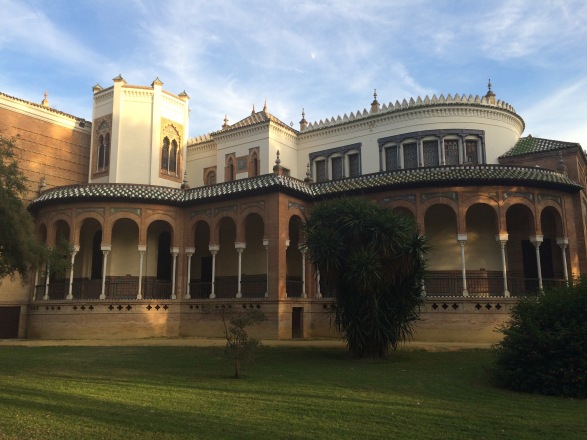 Our driver took us back to the Plaza de Espana, which caps the park and, as we discussed in the first post, is the crown jewel of Exposition. 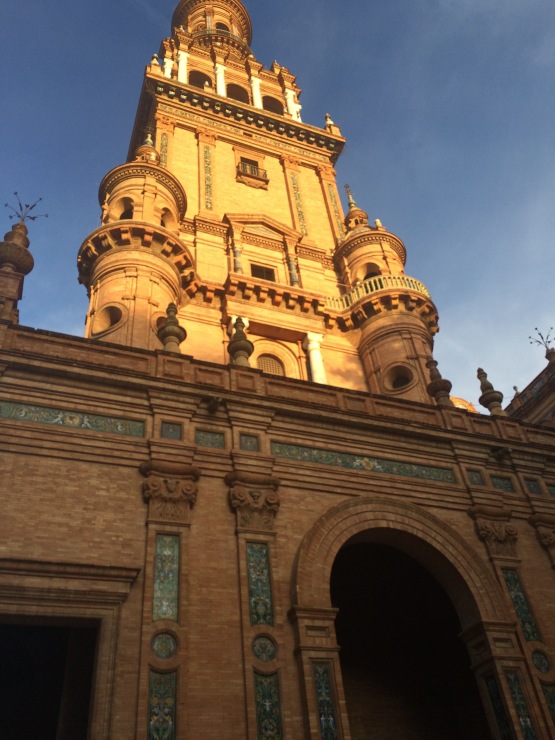 Our drive ended at the Bullfighting ring and museum. He dropped us right in front of the gate, graciously opened the door for us, and helped us down.

The Bullring reminded me a lot of our modern sports stadiums.  Rounded edges, tall walls, different gates to let people in and out. 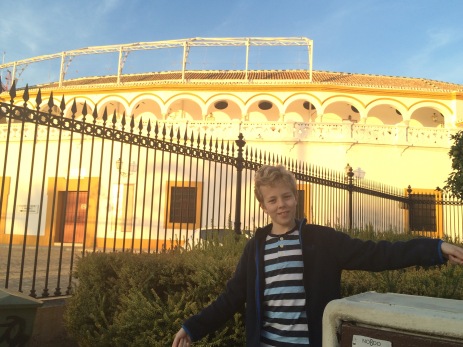 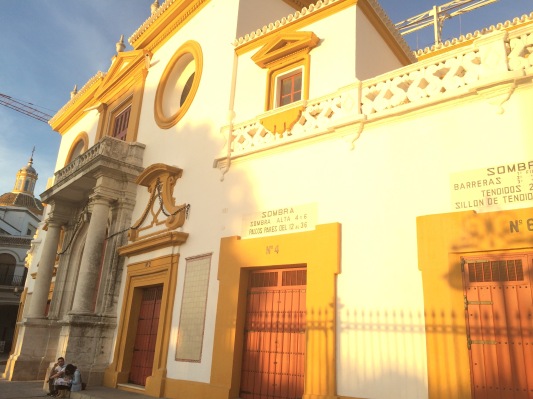 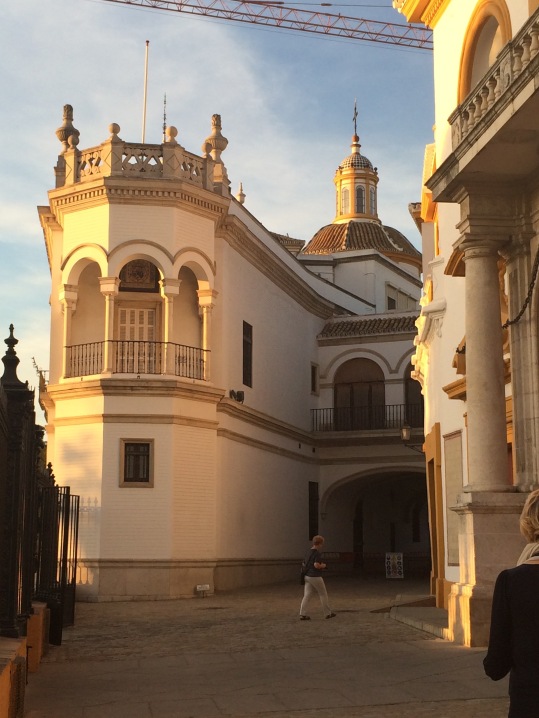 And like other stadiums, there are statues of the “greats” out front. 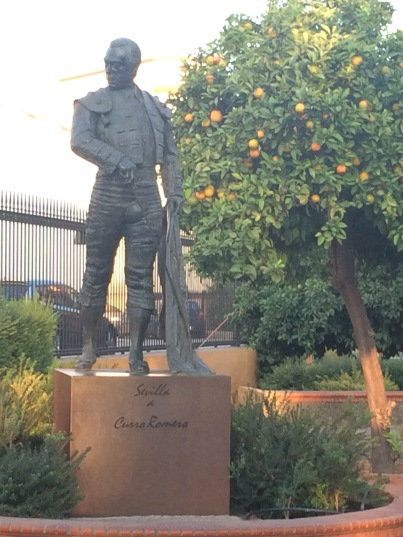 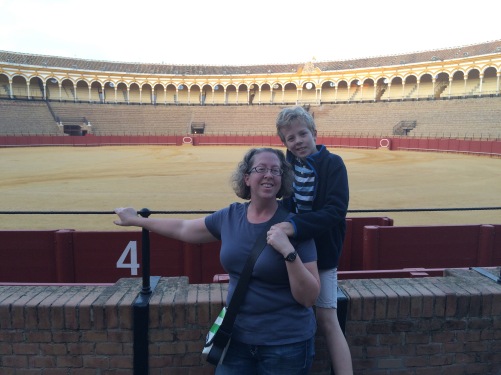 The inside was huge with all these delicate Baroque arches.  It was completed in 1765 and they still conduct fights from April to September. Bullfighting was originally all about training soldiers and cavalry for combat. It wasn’t really a sport.

After we had marveled at the construction and sheer massive nature of the ring our tour guide took us into the actual museum portion of the stadium.  They have an actual art museum that features paintings and sculptures of bulls, matadors, and horses.

The capes are works of art in themselves. Each one took months or even over a year to make.

The museum is quite small. It had posters and pictures, snippets of history, and stories about heroes of the ring. I don’t know if I would go again, but I do feel somewhat more informed about why people thought fighting bulls was a good idea in the first place.

It was already sunset when we left.  There are very few things I like more than palm trees silhouetted by a yellow and orange sky.

Our walk back to the main section of the old town took us by the Puenta de Isabel, all lit up for the tourists having an evening stroll.  There are tapas restaurants all along the river on the other side. They have set up tables across from their restaurants next to the river and put up outdoor heaters to entice people to stay and eat.

And we did. In fact, everywhere on Friday and Saturday night becomes a cafe. This is just outside the City Hall.

We also ran into an old friend. 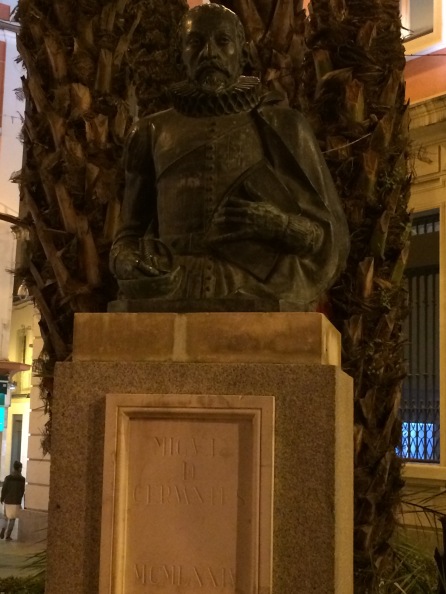 The next day we had a flight to catch. BUT! We had time to do just one last thing. Right up the street from our hotel was Casa de Pilatos.  The man at the front desk had recommended it highly. And it was just about 50 steps up from the doors of the hotel. We could leave our bags with them while we popped out and then come on back and catch a taxi to the airport.

This is what we saw from the front plaza. It didn’t inspire confidence. 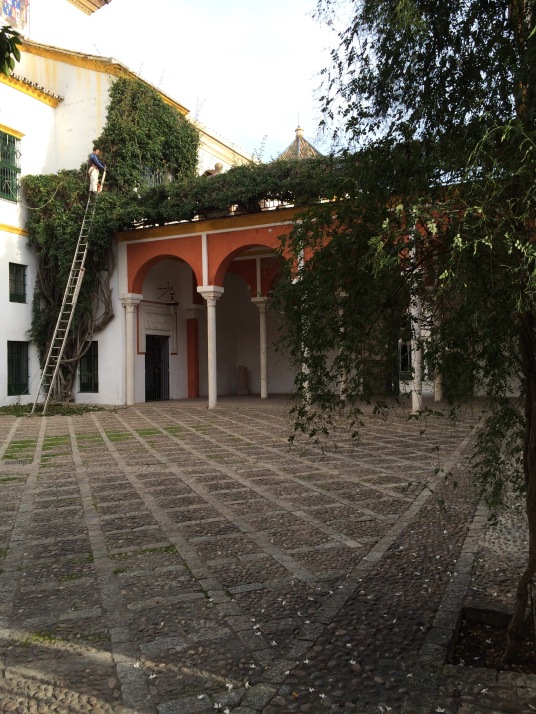 This was kind of nice, but still – not as “spectacular” as our man promised. 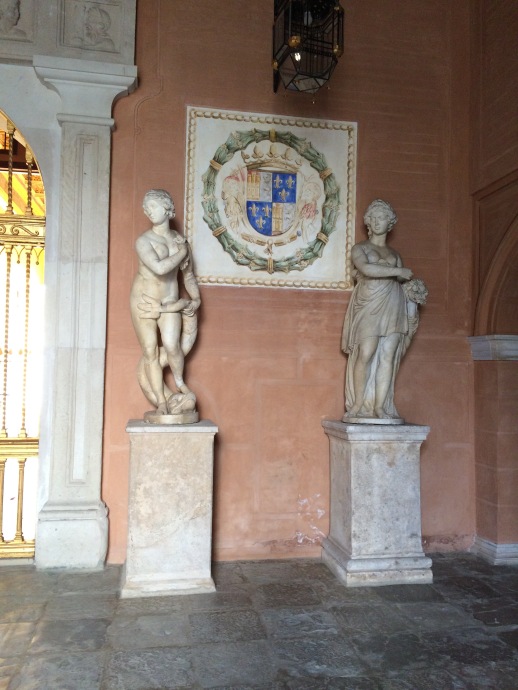 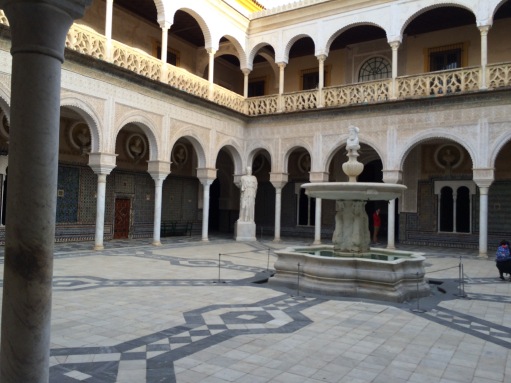 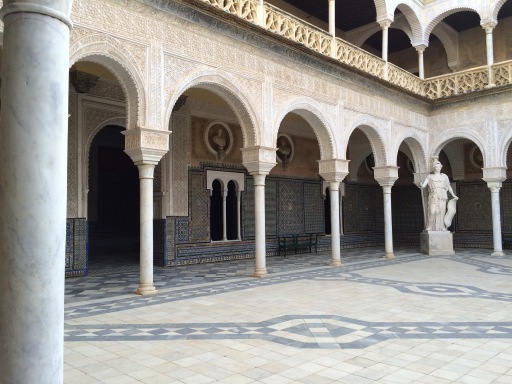 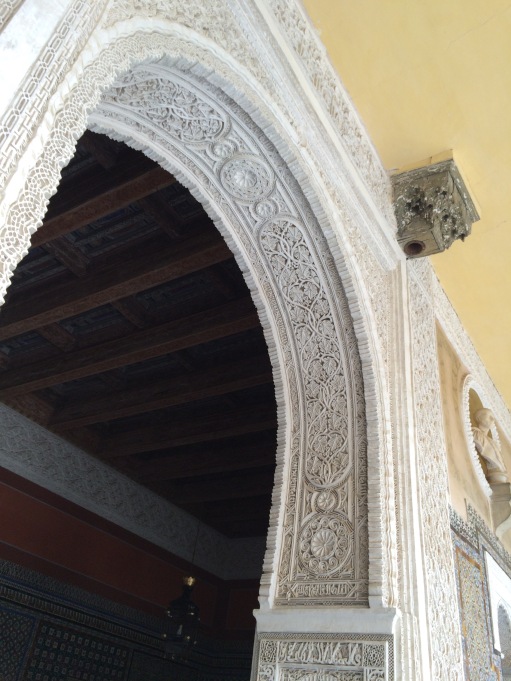 This is known as Pilate’s House, however, it has nothing to do with Pilate whatsoever. It was built by Pedro Enríquez de Quiñones and finished by his son Fadrique Enríquez de Rivera. Fadrique was inspired by a trip to Jerusalem in 1519 and that’s where the name and some of the Roman style came from.

The entire house, both stories, is a blend of Renassiance, Mudjedar, and Roman styles. 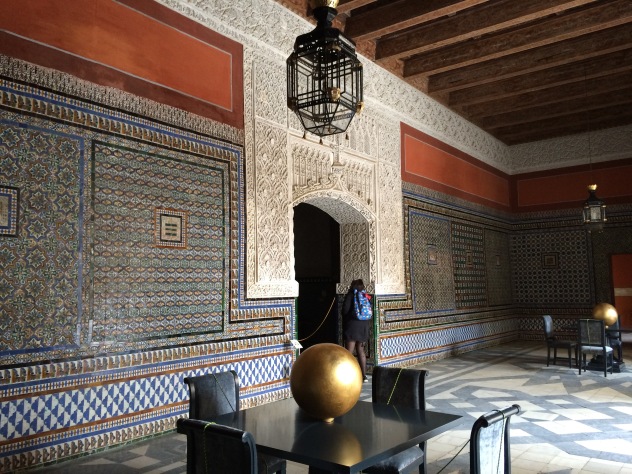 A lot of the rooms are wide open to courtyards full of lush gardens and fountains. 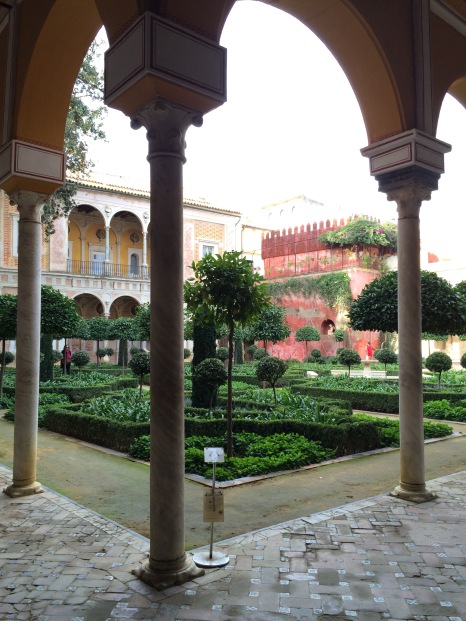 This is one of the private, closed-off gardens for the house. It is so quiet and just perfectly laid out.

The builders brought back artifacts from Jerusalem and from other Roman cities. Including Minerva’s helmet. 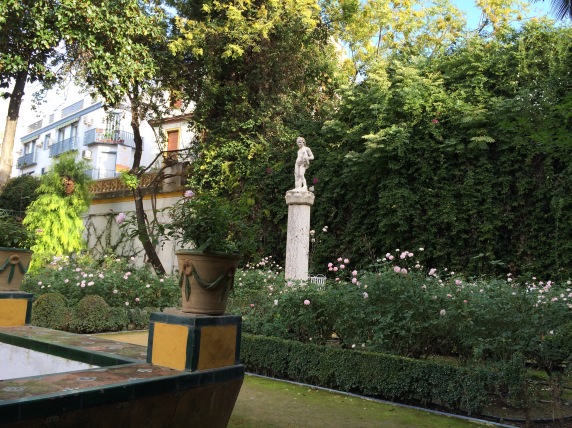 After I pulled myself away from the garden and the wonderful 75F degree weather, I wandered back through more of the rooms. I continued to drool over the amazing tile work.

And look at this wonderful carving work! This kind of stuff is throughout not only Casa de Pilatos, but all over Seville. It’s so amazing that it’s not molding, it’s carved. Today it would be cement poured into a mold and sold at Home Depot. 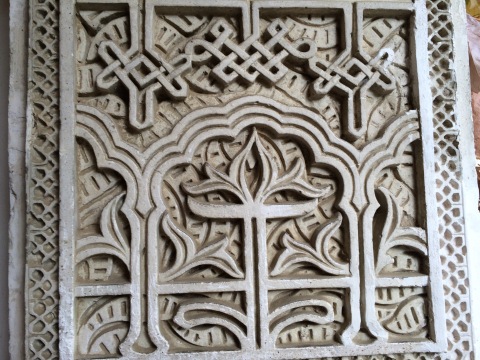 And then we got invited on a guided tour upstairs. And these are the stairs! This made the rest of the upstairs tour – where people still are residing! – worth it.

Since the rest of the house is actually lived in, we weren’t allowed to take photos. To me that is totally understandable. I wouldn’t want people taking photos of my house either, although if my house were this amazing I might consider it for about a week.

This was the perfect end to our stay. It was quintessentially Seville. So stylish, elegant, and a wonderful celebration of all the different cultures that have made Seville what it is.  I cannot wait to go again.  Seville has made it into my top 3 favorite cities in the world (so far).  And you should go, too!