Our last few months here are all about leaping at opportunities that living in Europe affords us. Getting to Greece with minimal fuss for a full 7 days over the kids’ ample spring break definitely qualified as an opportunity. So we leaped at it.

Athens reeks of history. As you walk down the street you will suddenly come across half excavated ruins from the 5th century BC, or a tiny church from 300 AD sitting between buildings that went up in 1910.

Athens is also a vibrant, modern city. Bustling and heaving with people, motorbikes, and cars. Straight off the plane we got into a taxi with a man whose throat was heavily bandaged  from some kind of surgery. He spoke almost no English and drove like a maniac – full speed ahead while weaving through cars and streaking up the center lanes, veering off at the last minute to avoid a crash.  I was in the back distracting the kids while Mark got a front row seat to this thrill ride.

It’s obvious the recession has hit Athens hard. Buildings are dirty at best, crumbling at their worst, and covered in graffiti. I think I saw one building with clean fresh paint the entire week we were there. The hotels were the best kept buildings because Athens knows it is a tourist town. However, there is still a hum of happy vibrancy.  That vibrancy has been there for thousands of years and it will be there for thousands more.

Nowhere was this energy and life more tangible than in the market bazaar and in the food. Our hotel (Fresh Hotel. Totally worth it.) was very close to both of them.

I loved the bazaar. It was a visual cacophony of stuff everywhere.

“We have an upstairs, too!” Called the man.  Well, how could I pass that up?

There was so, so much. 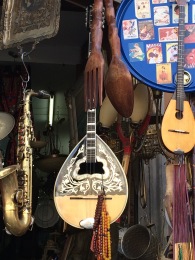 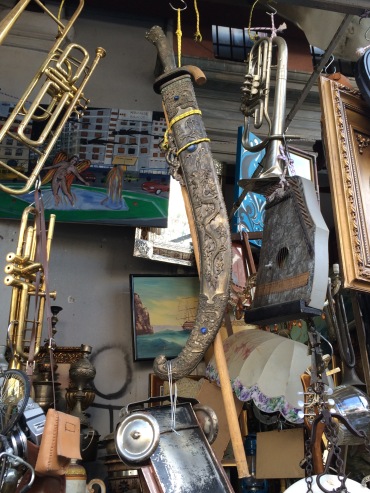 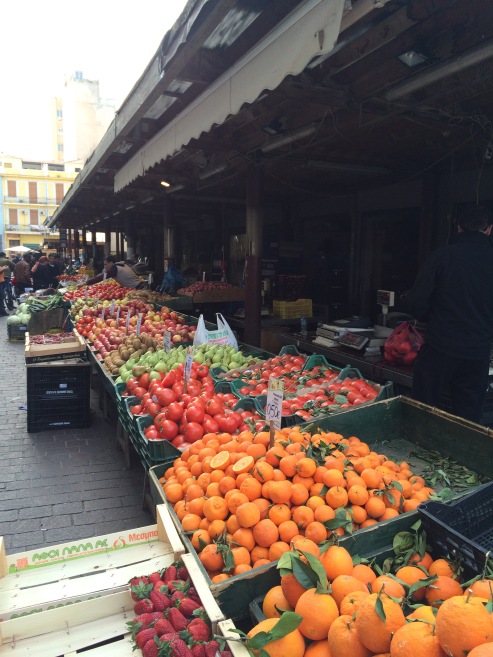 I made a few bargains. The haggling was fierce and really fun.

The food market was incredible. So much food and FRESH.  It made me want to have access to a kitchen so I could cook up a few dishes.

I mean, just look at the fruits and vegetables available over here! And all fresh that day. Kiwi, tomato, pears, apples, zucchini, eggplant.  And oranges!

Greece actually grows a ton of oranges. Our hotel had a fresh-squeeze orange juice machine in the breakfast room. The hopper on top was packed with oranges every morning and oranges would feed through it and come out as delicious juice. I think H had 3 glasses every morning!

Then we found out that there were fresh-squeeze carts all around the city and at the snack carts at several day-trip locations.

You could also buy oranges by the crate just along the roadside outside of Athens. I would have loved to have the bus stop to pick some up, but it sped on by so we weren’t late to our next destination.

At the ends of the rows of fruit there are the olive and nut sellers. Just baskets and bins and trays of olives and nuts. All different varieties and flavors. And right next to them are the salted fish and snail sellers. Now that was an incredible smell. Briny and potently fishy. You knew right where you were in the market. 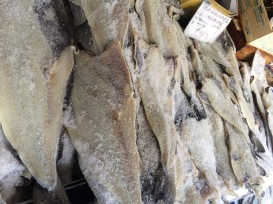 Across the street was an old-fashioned warehouse-like building with rows of cases being manned by people in spotless white coats.

There wasn’t just beef. There was rabbit, whole lamb, chickens in a variety of states, and – to E’s horror – offal for all of them. Offal are the internal organs. They had ALL OF THEM for all the animals (even the heads).  I believe he considered vegetarianism for a minute.

We walked up and down the rows with me thinking of recipes for everything I saw and E saying, “Are those eyeballs??” Eventually I took pity on him and we went one building over into the fresh fish market.

You would think that it would smell, but it didn’t. At all. It was all fresh caught that day and it had the odor of being outside on the sea. Calamari, octopus, the biggest shrimp I have ever seen, sardines, anchovies, salmon, and hundreds of other varieties of fish. It was gorgeous. 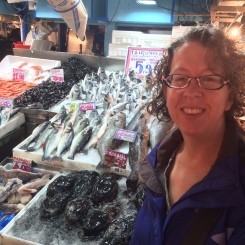 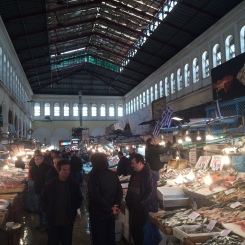 There were tourists ambling through with their cameras out. The restaurant chefs had been there and gone at 5am already and their meat and fish purchases were back at the restaurant getting ready to be prepped and served for dinner that night.

I met this lovely woman who explained all this to me. She had lived in the US for a few years and then in Australian for 30 years! Now she was back in Athens and trying to make a go of her jewelry business. She was having company and was going to make a stuffed whole fish and stuffed squid. I would have loved to have been in her guests’ shoes! 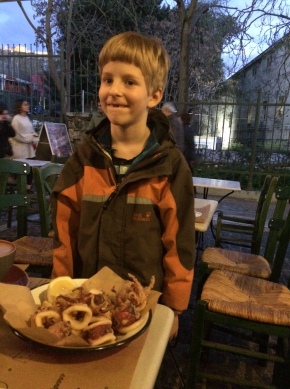 H was especially excited to see the squid. See, we got calamari one evening as an appetizer for Mark and I, but then the kids, who we encourage to be food adventurers, decided to try them and discovered they liked fried calamari! Especially with fresh lemon juice. I think Mark and I each got 2 pieces while the kids hoovered up the rest! H liked them so much he got them as his main course the next two nights.

They didn’t find the grilled octopus as delicious, but that left Mark and I with something we could have all to ourselves.

It was so delicious! They were missing out for sure.

They didn’t miss out on the ice cream though.  There are gelato, ice cream, and frozen yogurt stands all over the city. They are usually combined with or sitting next to a bakery serving about 12 different varieties of baklava. The boys would get ice cream and Mark and I would get baklava. Everyone was happy.

The best food we had was along the Agora. Not only did every restaurant we wander into have the best food ever, we had an incredible view of the Agora and Acropolis.

We would get a mixed grilled meat platter to share. It came complete with some grilled pita bread and fries. There was nothing more delicious than grilled chicken, grilled pork skewers, and lamb kofta wrapped with soft pita bread.  (The US should be ashamed of that stuff they sell in the supermarket.) Again, the boys picked off our plates when they had finished with their food.

The boys’ favorite dish though was chicken-on-a-stick. They ordered it at every lunch. They got 2 chicken skewers and fries and were happy until it was time for ice cream. Greece definitely had the most child-friendly food of any country we’ve visited. The sauce is usually on the side and the foods are simply prepared.

And, really, a view like this would make any food the best you’ve ever had in your life.

Greek food isn’t the only thing I fell in love with while visiting Athens. Wait until you see some of our day trips.

Megala's Kitchen
A Note From Abroad