Everyone has heard of the Oracle of Delphi; the mysterious omniscient woman who sat on a three-legged stool above the smoking and rotting ruins of a dead snake and spouted cryptic fortunes and prophesies that came to her from Apollo.  The fame and promise of all-knowing-ness has prompted others to adopt her name for their companies, characters, and pseudonyms.

Being The Oracle was a tough job. She had to fast for a number of days, sit precariously balanced high up on a backless stool, and hang over the chasm that was oozing what was probably hallucination-inducing methane gas. (You can still catch whiffs of it around the sight.) It wasn’t uncommon for The Oracle to pass out, get dragged off into the back, and be replaced by another Oracle.  That’s showbiz.

Thanks to Hollywood I envisioned the Oracle living rather rustically, in an isolated cave in the hillside. That is definitely not the case.

Delphi was a huge sanctuary complex with temples to Apollo and other gods, statues, a stadium, a theater, and a hippodrome. And it’s up on a mountain, specifically Mount Parnassus.

Mount Parnassus is featured in many Greek legends. Pegasus lived on Mount Parnassus. Dionysus also liked it a lot and the Temple at Delphi was “inhabited” by him during the winter months when Apollo was on vacation. Kind of like letting your little brother use your condo during Thanksgiving. Pan and The Muses also liked to hang out in some of the caves there.   And, finally, in the Greek version of The Flood and The Ark, Mount P is were the Ark came to rest when the waters started to go down after the rain stopped.

There are about 16 different tour companies that bring people to Delphi each day. We booked the tour ahead of time, but our hotel could have book it for us a mere 24 hours in advance. Plus they came and picked us up!

You can drive there as well, but I highly recommend going with a guide. You get to skip the (very considerable) line, you don’t have to fight for parking with the hundred other cars, and our guide actually guided us through the site and the adjacent museum.

You come in on a columned pathway and would be surrounded by little buildings. Maybe shops selling ye olde sacrificial goats? 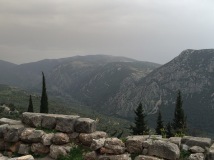 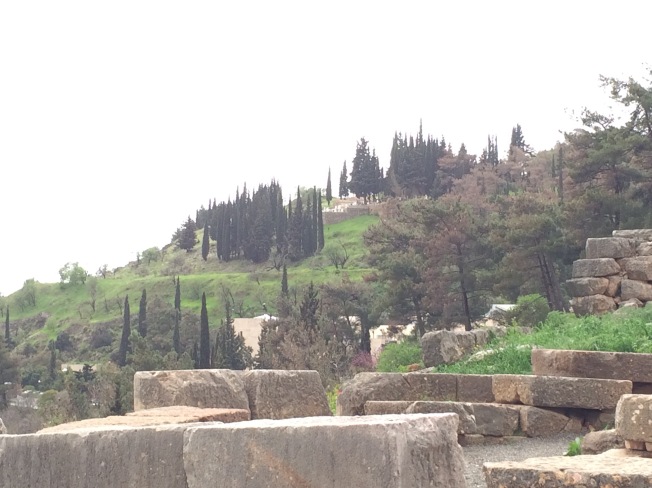 All of this is uphill, of course. And as you continue up the hill you pass the Athena Treasury that was built after that famous battle at Marathon in 490BC. They kept all the good stuff there, possibly including the Omphalos, or stone that Zeus threw down to mark the navel of the world. Archaeologists found it pretty much right were it is displayed now.

The Temple of Apollo where the Oracle lived and worked dominates the landscape. The pillars rise up from above you and the pathway snakes (pardon the pun) around the temple and up to the doorway.

And then you can walk (uphill) past the doorway and get a view looking down at the temple itself. 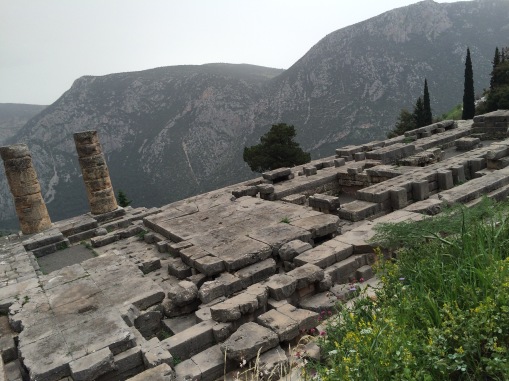 The Oracle would have been somewhere deep in side the temple and kind of in the bottom levels, which reinforces the whole “deep in a cave” idea that I carry around with me.

Around the base of the temple there are foundation walls with tiny Greek writing all over it. Our guide told us that this was actually an archives! The writing is recording administrative and judicial decisions, bills of sale, and historic events. 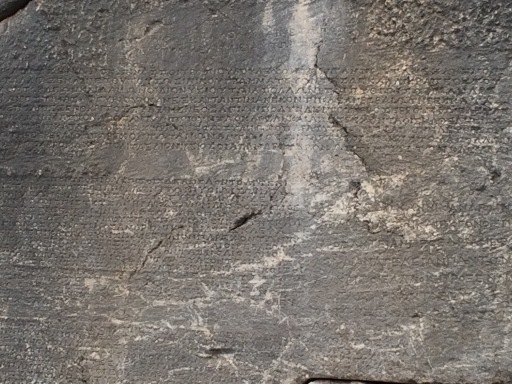 It basically says (and I very much paraphrasing here) Everyone must wait in line! Except for these guys because they paid for the Temple. 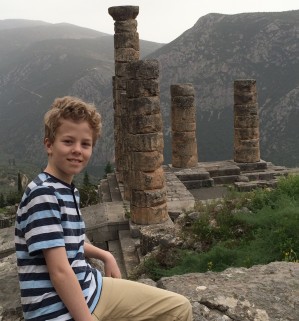 People were constantly in Delphi even though the Oracle only spoke once a month on the 7th day.

It took a long time to travel to Delphi back in the day. You either had to walk over rocky hills and mountains from the north on rocky and dirt footpaths or you had to sail into the harbor below and then walk at least a day up the mountain.

Either way you were on the road for a long time and could be slowed down even further by weather. And if you were in a boat you could be attacked by pirates!

Pirates were a very real concern in ancient Greece. The important cities were never right on the coast. They were always set back a bit and just a little out of the line of sight from the water.  There are harbor towns, but they were always small ready to defend themselves.

Consequently there are game sites at Delphi! The harbor of Delphi had a hippodrome for the water games and, going further up a particularly steep part of the hill, they had a stadium. 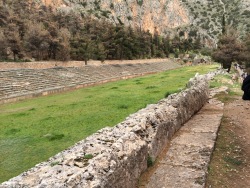 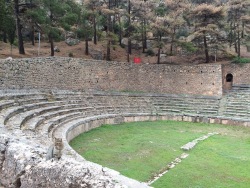 Our guide told us this was considered a “small” stadium. It seemed HUGE to me!! It was at least two times as long as a football stadium and at least as wide as a soccer pitch. Just acres of room for games to happen.

And, since Apollo is also known as a god of music and Dionysus also “lived” there in the winter, they had music competitions and a theater, too!  It seems the vibrations in the air brought out the dramatics in our kids. 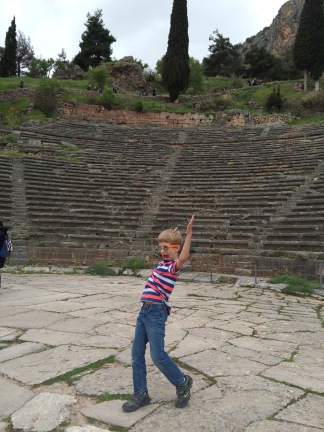 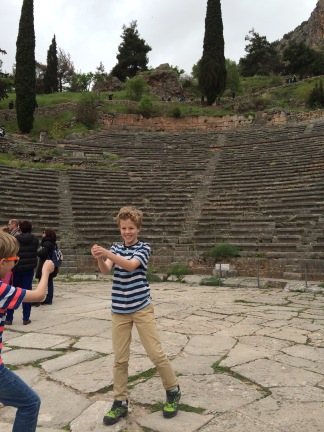 We had almost 2 hours to hike around the site of Delphi. And you can go practically everywhere. There are security-type people there to make sure you don’t use the ruins as your own climbing gym, but you can get so up-close and personal with them that it just seems incredible to be right next to buildings that Socrates might have touched.

It’s no surprise that Delphi has been the focus of archaeologists for hundred of years. What is a surprise is how many artifacts are actually still at Delphi in the museum. For example, this spire… ——>

Used to have this Sphinx on top. 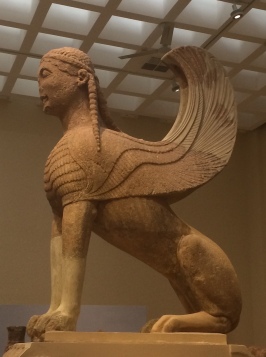 It might be really tempting after hiking outside for 2+ hours to just want to skip the museum, but that would be a mistake. There are also some wonderful pieces from the temple and sanctuary area that have been conserved. Those pieces help to fill out the story of how important Delphi was as a sanctuary city. 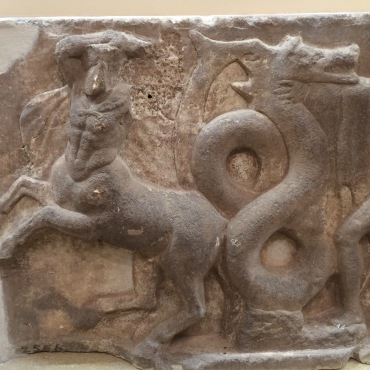 The temple sanctuary was a place for art, music, architecture, and culture to survive and thrive. And the ruins of Delphi still accomplish this. We still read versions of Greek myths and stories in modern literature. When we look around at our banks and government buildings we see Doric columns with Greek key trim and carved friezes.

And the remnants of the statues of Apollo and Artemis are unbelievable.  They still have a lot of the gold that coated the wooden frames and the ivory faces are almost perfect.

And I just fell in love with these brass sculptures. I’m trying to find a way to incorporate the horse and Spartan images in my art. 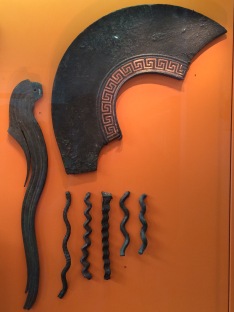 Our guide kept us moving through the museum. There were a lot of other groups moving with us. The guides knew each other and had an almost choreographed dance that took us through the various rooms of the museum in a way that ensured we weren’t crowding each other, which made the experience even more pleasant.

Another bonus of going on a guided bus tour were the little stops we made along the way.

While we didn’t actually see signs of the saint, we did see something spectacular. We stopped at the Corinth Canal. It’s an incredible feat of man’s determination to get stuff done. 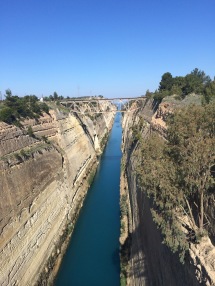 It is deep and long.  They carved it down to sea level so they wouldn’t need locks. The walls are 26 feet down and near vertical. It’s so deep you can bungee jump from there. The entire canal is 20,810 feet (6,343 meter) long.  And, yes, the water is naturally just that blue. You have to see it to believe it.

And then after Delphi, when we were tired and foot-sore and in need of sugar, our guide took us to this bakery in a truck stop along the side of the highway.  Talk about your hidden gems! They had about 16 different variation of baklava and just as many variations of Turkish delight! The white trays below are all full of Turkish delight and other Greek candies that need to be smothered in powdered sugar just so they don’t stick together. Nothing worse than clingy candy. 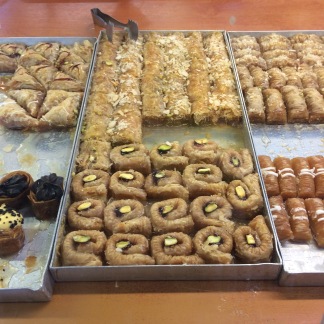 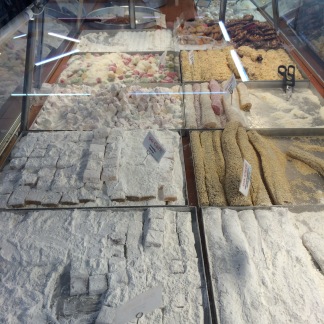 You picked what you wanted, weighed it out, and then ate it. They did, helpfully, have gift trays of the candy already assembled in case you were in a rush. But, really, you should try a bite of everything first. This is a big decision, after all. It’s not like you’re coming back here anytime soon.

Delphi is a fantastic day trip out of Athens. But that’s not the only place we went to. Stay tuned for Mycenae and Agamemnon’s Tomb along with some Greek island!