E, our oldest, is very into Roman and Greek history. He is so into it that his grandparents bought him a children’s edition of The Odyssey when he was 8. He has read every book in the Percy Jackson and the Heroes of Olympus series. About 50 times! (Two awesome series by Rick Riordan. I highly recommend you buy them.)

His one request about our trip to Greece was that we see Agamemnon’s Tomb at Mycenae. How could we refuse?

Just in case you aren’t a 10 year old boy who is obsessed with the Greeks let me explain who Agamemnon is.

Agamemnon was the king of Mycenae back in the day and his family was a mess. Tons of generations of in-fighting and literal back stabbing and then his brother’s wife went and ran off with some upstart named Paris out of Troy.  His brother came crying to him and Agamemnon got roped into leading the troops off to Troy to get Helen back.  It’s the sort of drama that you would expect to find from Real Housewives of Mycenae.

It took him 10 years to get back from Troy and the minute he does his wife stabs him to death in his bath. Talk about having a bad life.

Agamemnon wasn’t the first guy to live in Mycenae. Legend says that Mycenae was founded by Perseus, of Medusa’s head fame. Archaeologists have found evidence that people have lived there since before the Bronze Age. Mycenae was extremely important to Ancient Greece as a center of commerce and a military compound. Mycenae is built on a hill strategically located just out of sight of the shore line of the Aegean Sea. (Again with those darn pirates.)

The site of Mycenae isn’t quite as big as Delphi. There are no stadiums or theaters. And there are no surviving intact buildings.

But there is quite a view. 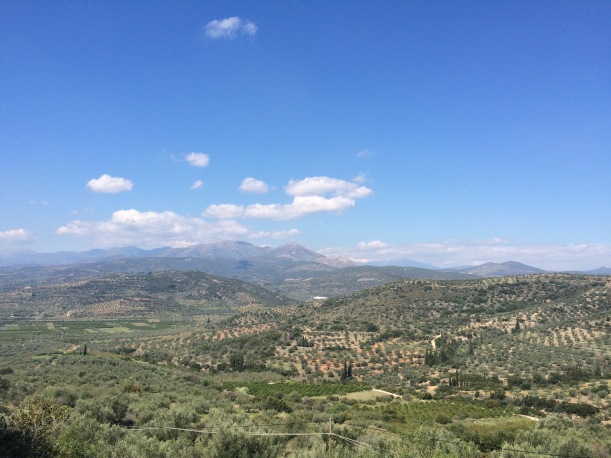 Mycenae’s most famous landmark is the Lion’s Gate. As the guide said, “This is your photo moment, here.” We took her word for it and queued up to get our shot along with everyone else. 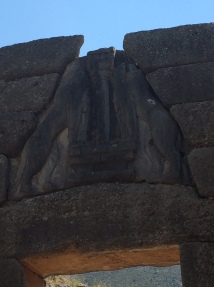 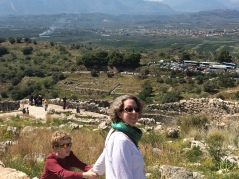 The site was a fun little hike up the hill to the acropolis site at the top. The kids were delighted to leap from rock to rock and court an injury which would probably ended with a helicopter ride to a hospital.

Before we went over the Agamemnon’s Tomb, our guide took us into the small museum that contains genuine replicas of Agamemnon’s golden mask and some of the other items that were found at the acropolis site as well as in the tomb. 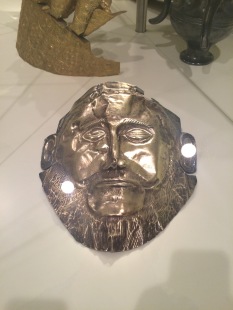 The tomb itself was huge and shaped like a beehive. This was apparently quite a “thing” back then. The ancient builders were able to build beehive shaped domes, but hadn’t quite gotten a hold of the physics of arches and true half-circle domes. Don’t worry. The Romans helped them out. 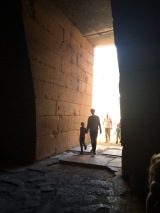 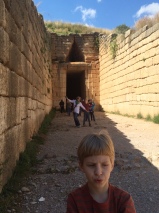 It was cold and eerie inside and filled with a small swarm of actual bees.  E said, “I thought that this was just supposed to shaped like a beehive. Not be an actual beehive.” It was a little unpleasant to walk through a cloud of bees and hope that you wouldn’t be stung. And when you got inside it was exactly like being in a cave full of bees.  Here is a weird picture of the bees swarming in the dark tomb, but if you squint and then lie you would almost believe you are seeing ghosts.

After we escaped the bees we hiked up the hill through the tall grass to the top to enjoy the view. I say “we,” but I mean Mark and the boys did. I was all done with the walking portion of my morning and waited at the bottom.

As we walked back to the bus I asked H, the 6 year old, what he thought and he said, “What I can’t figure out is why you people keep taking me to see big piles of rubble.”

Well, son, get ready for another pile because we are going to Epidaurus next. 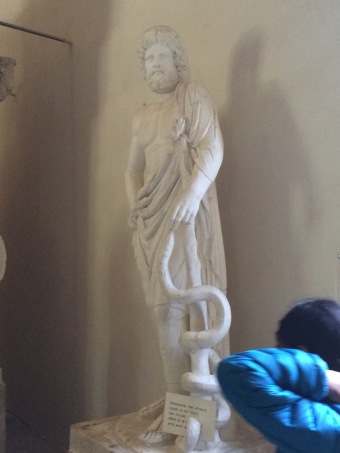 Epidaurus is a little town just up the road from Mycenae. It was famous for being the birthplace of Apollo’s son Asclepius, who no one has ever heard of.

Asclepius was born to a mortal woman who died during the birth. Since Apollo can’t really be looking after a child while pulling the sun across the sky he gave Asclepius to Chiron the centaur to raise and teach him all about medicine and healing.

Somewhere along the way Asclepius became friends with a snake, who also imparted healing knowledge and traveled with Asclepius by winding himself around Asclepius’s walking staff.

Hmmm…. a snake wrapped around a staff… that sounds familiar…

Some other names that might sound familiar are two of his daughters: Hygieia (the root of hygiene) and Panacea, which in modern English means a universal remedy.

As you can probably guess, Epidaurus was a place associated with healing and medicine.  Consequently, people came there to be healed.

Off to the side there was a large building/temple where people can a waited for the god or his handymen to heal them. Basically, I see it as one of the first hospitals.

And because there were so many gods present at Epidaurus they had to have a theater. Nothing says, “Time for a party and some entertainment” like a hospital, I guess. Epidaurus has one of the best theaters in the ancient Greek world. The acoustics are beyond impressive.

There is a stone in the middle of the stage down below and when you stand by it and clap you can hear your clap echo all around you. You can speak a line in just a slightly raised voice and the people at the top where this picture was taken from can hear you without straining.

We all had to test the acoustics. I, of course, had to test it with Hamlet’s soliloquy. If you’re going to try and show off in a theater you kind of have to do it with Shakespeare. 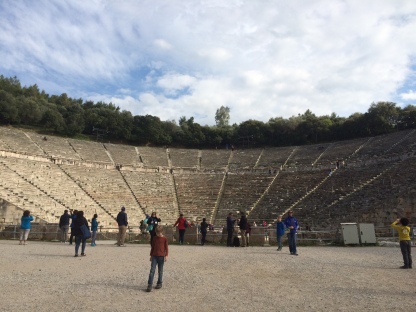 It was delightful short stop during our trip back to Athens from Mycenae. Well, Mark and I thought it was delightful. We didn’t let H get fresh-squeezed orange juice from the food sellers and, thusly, the entire trip was worthless. E got to play with a couple of puppies and so Epidaurus was tolerably fun.

The whole day trip really opened our eyes to what Ancient Greece was like at the height of its influence. The Greeks were hardy people of immense intelligence. I feel that this is one of the reasons we continue to hold them up as an example of what a civilization should be. They were curious and determined, valuing intelligence and creativity just as highly as physical prowess. (I’m not talking about the Spartans, here.)

Perhaps we can learn a few more things from our elders.

Next time we sail the Aegean and explore three of the Greek Islands!