Near the end of our Greek adventure we sailed the Aegean Sea! The same waters of where Jason and the Argonauts when in search of the Golden Fleece and Theseus sailed to fight the Minotaur in Crete.

For us, we were visiting the islands of Hydra, Poros, and Aegina. I have circled them in red on the map below. 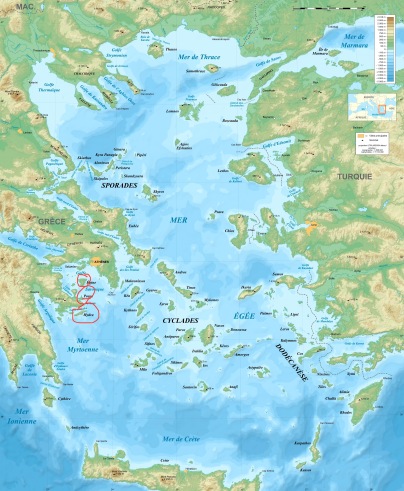 The Aegean is huge. You need about 3 months to see it all.

We started at the port near Athens (the orange dot on the map) and sailed out to Hydra first.  The port is actually a good 40 minutes from the center of Athens where we were staying. We had to get up at 5am on the first morning of Daylight Savings Time which was horrible. We all felt like it was 4am and there was no coffee. I thought I was going to die.

The kids were troopers, however, and followed along with us to get to our tour bus that would take us to the boat.

Almost every tour we signed up for in Athens provided transportation. We never had to negotiate the subway stations, bus schedules, or taxi lines. The bus would pull up right next to our hotel to get us so we barely had to walk anywhere. Because of how close we were to the city center we were always one of the first 2 groups on the bus. We didn’t mind it as it gave the boys their pick of seats. However, it also meant that we had extra time on the bus while we picked up everyone else. The boys were less than thrilled about that.

Our hotel had kindly packed us a breakfast of cheese sandwich, apple, and hard boiled egg. After an agonizing 75 minutes we made it to the port and the boat and coffee.

There were probably 150 to 200 people on the boat with us. Like a herd of cattle we rushed up the gangplank and into the 2nd floor salon to grab a table.  E, who is thin enough to slip through the crowd and quick like Mercury, snagged us a table and the boys began their breakfasts. I had my head up with nose in the air like a seasoned hunting dog scenting the air for coffee.

Clearly, they are promising coffee in many different alcoholic and non-alcoholic variations. I opted for just regular coffee at 6:30am. But I was awfully curious about the Athens One day cruise coffee and what the “secret ingredient” might be. Sadly, I will never know. 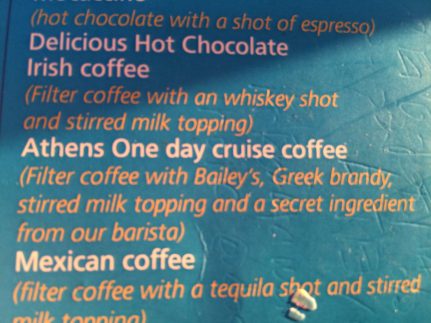 Now that I was properly awake I could enjoy the view. The Aegean is a marvelous body of water. It was relatively flat and easy going for our whole day, even with some drizzle.

The islands dotted throughout the sea help to create a calm area perfect for sailing and fishing.  In comparison with the rocky and uneven land the sea is a very easy way to get around. No wonder the ancient Greek decided to sail as soon as they figured out that wood could float.

These little fishing ships were everywhere. We saw at least a dozen of them as we steamed down to Hydra, the island furthest away. We saw other ferry boats like ours and bigger cargo container ships, too. It is so well trafficked that the boating lanes show up on Google maps.

Getting to Hydra took about 3 hours, but we hardly minded. The boys were drawing and reading books. I bought them a couple of chocolate muffins and they were delighted. Mark and I were sipping coffees and chatting as the scenery went by. It was the most relaxing part of the trip.

And soon we were at Hydra. It’s such a quintessential Greek island. It, along with Santorini, are what you think of when you think “Greek Isle.”

We got off the boat and were greeted by lines of men with donkeys. Each donkey was wearing a cloth saddle that reminded me of what you would typically see on the backs of camels. There are no cars permitted on the island and the donkeys are the only sources of transportation.

The donkey above was tethered outside of a food shop.  I was staring at it as I walked by and was almost run over by the man leading the donkey out of the market shop.  I poked my head in the shop and saw another man leading a donkey through the aisles doing his own lunch shopping.

The main street of Hydra was loaded with shops and cafes. The proprietors of the cafes were outside holding menus calling out specials to the passersby to entice them to a seat. The shop owners were standing casually by the doors watching all those potential customers peek into the windows and stare at the displays.

Hydra had a lot of jewelry shops. I ducked into several and came out with a few bracelets for myself.  Mark and the boys went into the naval museum to look at models of ships and paintings about war battles in the Aegean.

We were only on Hydra for about 90 minutes before they herded us back on board the ship. Half of us went into the dining salon on the first floor of the ship to eat and the other half went upstairs for coffees and the like. The meal was delicious. Grilled meats, herbed rice, spanakopita, pasta, dolmas, and salads with dessert at the end.

We stuffed ourselves silly and then ambled upstairs to take in the view as our meal digested. It was only 45 minutes to Poros and we were pulling into port shockingly soon.

Poros is also a small, quaint island and is just north and around the corner from Hydra. My small Iowa hometown has a larger population than the entire island of Poros. The most famous landmark on Poros is the clock tower at the top of the hill. It’s famous because you can see it from about every spot on the coast. It’s not a lighthouse. It’s just a clock tower.  You can hike up there and get a magnificent view of the sea and island.

It’s a neat little place to get a different slice of Greek life. All of these islands thrive on tourism. There are passenger boats here two or three times a day. The water lines of all the islands are filled with cafes, restaurants, and shops that are 100% geared towards tourists.

We got back on the boat after a measly 45 minutes. The people that hadn’t eaten when down to the dinning salon and we went up stairs to the lounge to watch the water.

The final island we went to was Aegina. It is the largest island that we visited and one of the largest in the Aegean Sea.

It’s big enough to have more than one city on it. We docked at the capital city, aptly named Aegina. While we were there we could have selected one of two tours. The first was an eco-tour that would take us through the jungle. The other was a trip across the island to the church of Saint Nectarios of Aegina.

It was threatening rain so we decided not to go into the jungle and since we’d had just about enough of churches during our European travels we didn’t go to see Saint Nectarios, which the 6 year old insisted calling Saint Nectarines.

Instead we wandered down the one main street in town, found a church, and had some ice cream. E declared the ice cream the highlight of his day. 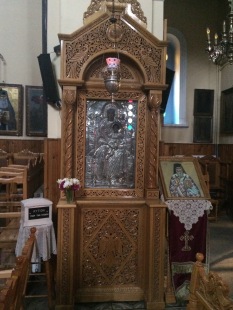 Then we went the other way down the street to try to see another bunch of rocks, but the gate was locked. This is all we could see. It looks like it would have been fun to hike around.

Aegina had a beach! It served double-duty as a dry dock which made it sort of picture-worthy. 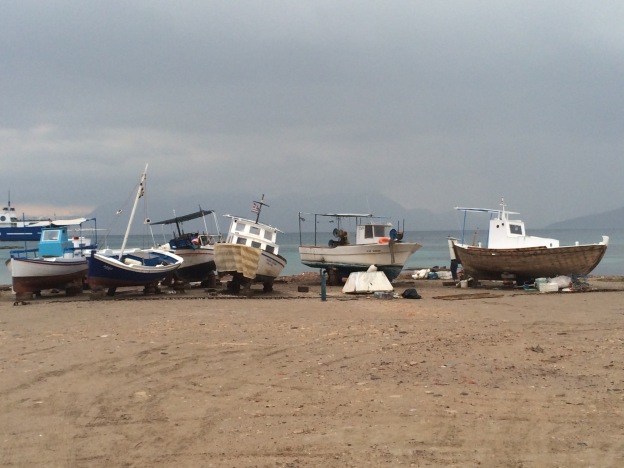 I wish we had had more time to explore and more of a clue as to which direction to go to explore on our own. Just being on the sea was magical, but if you are seeing islands you kind of want to see the islands.  All-in-all it was a great day. We got back to the hotel at 8pm, exhausted and starving. Thankfully, our hotel had a great restaurant up on top floor which had excellent food and offered a view of the Acropolis. It was a great end to a pretty good day.

One thought on “Hydra, Poros, and Aegina”