One of our missions here was to visit all 26 cantons in Switzerland. It took us 2 years, but we actually did it. We started in Neuchatel just after we’d arrived in Basel and finally, a month before we leave here, we finished in Glarus.

My husband wanted to hike in Glarus. He lured me into going on this hike up a mountain in Glarus with pictures of a beautiful gasthaus overlooking a clear, calm lake, mountains flecked with snow rising majestically in the background.  After our hike in Appenzell where it was so steep I wanted to lay down and die, I was a bit … cautious … about future hikes. He assured me, with topographical maps as evidence, that it wouldn’t be as steep. Plus we’d spend the night at the gasthaus at the top so we could really take our time.  So, I agreed.

Mark had us take a train to Näfels. It rhymes with waffles. I love waffles! I’m going to love Näfels. This hike is going to be fun! And the lake is Obersee! Fun to say! Woo!

H, the 7 year old, however, does not love waffles. Therefore, he informed us, he was going to hate Näfels. Why couldn’t he just stay home with Mommy? You plan the worst vacations, Daddy.

Oh, this is going to be joyful.

Näfels is a quintessential small Swiss town. Quaint, beautiful architecture, suspicious of strangers, and having barely anything open on Saturday and nothing open on Sunday. We tried to find a little restaurant or pub to eat in once we arrived, but no one was serving anything until 4pm. We got kicked out of two such gasthaus pubs and then finally found a very small grocer to get bread, meat, and crisps with a bottle of water to wash it down. We ate standing at the side of the road watching cars go by. They would slow down, stare at us, and then zip passed; ostensibly before we could ask for a ride somewhere.

This was the only ride we could find. 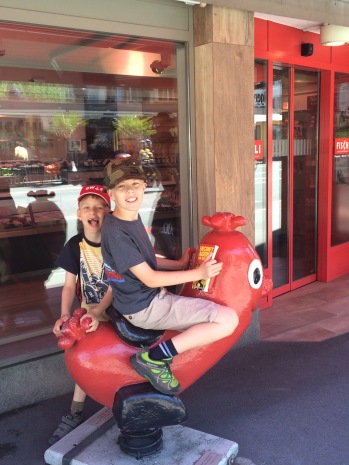 It was quiet, but we did see at least 3 other hiking pairs starting out from the train station. They obviously left us in the dust almost immediately. I am going to say it’s because I wanted to see the buildings and not because we are just slow. 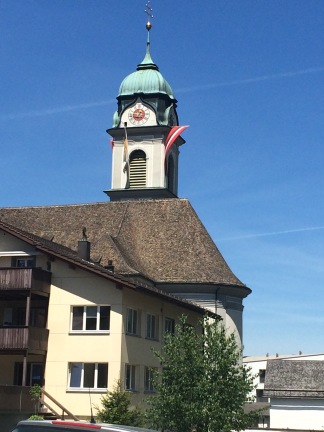 The hike started out well enough. Lush green fields, promising mountain views, and a shrine to the patron saint of lost hikers complete with offerings, which was placed conveniently next to a moss-covered boulder with the hiking trail marker on it.

All this we saw just fifteen minutes into the hike. It lifted my spirits. Maybe this won’t be too bad. It’s a little steep, but that’s okay! Nothing unexpected!

This was precisely the moment where E chose to inform us that his shoes were too small.

From the bottom you can see the top of a waterfall. It seemed like the path would go by, or at least close to, the waterfall. We encouraged E to forget about his pinched feet and see if we could find that waterfall.

Well, we found it. And it just didn’t go near the path. It was the path.

You literally have to walk through the flow of the falls. There are channels cut into the path to help the water flow down and allow for the actual hiking path to be just slightly less wet.  The boys LOVED it. The water is clear and clean and freezing. H was splashing water over his arms to cool down. E was trying to drink directly from the wall. Mark and I were exchanging heart attacks because there is NO safety railing. Whatsoever. At all. Nothing. One slip and you are washed down a 30 foot drop.

It was kind of magical once my heart slowed down and I had a vice-like grip on H’s arm.

We did eventually get all the way across and sat down on the bench to eat a little snack, drink some water, and rest our feet. (And it had worked! E had forgotten about his feet for the time being! Yay!)

Mark filled up our water bottles directly from the falls – making the boys delirious happy – and we continued on up a very steep portion of the trail.

About 10 minutes later we made it up to what is called “a feature point.” It was an overlook for the metropolis of Näfels. Complete with a bench perched on the very edge of a ledge and, once again, no safety railings.  Really, Switzerland is an entire exercise in Darwinism. If you are too stupid to know that if you step off the edge you will fall to your death then you deserve to fall to your death. And you need to teach your children and (a) physics, (b) consequences, and (c) common sense.

We were just about to continue on when Mark realized that he didn’t have the bag of food with him. It was back down the steep hill sitting by the bench.

So… back down the hill he went. The kids went to explore the wide spot that was a parking lot behind the bench and I sat on the bench and tempted fate.  Soon I was joined by a Swiss gentleman. It turns out he is a postman and he delivers mail to all the farmers and villager who live up on the mountain. He’s done it for 25 years. He loves it. He’s lived in Glarus all his life and so had his parents before him. I told him about our hike and that we’d left our food below by the falls and that we were going to Obersee.  And it was all in German, which he complimented me on! Figures. I just get a handle on German and we have to leave.

Mark was back in a record 15 minutes with the bag of food we had left. We said “auf wiedersehen” to our postman and had the enjoyment of walking along a relatively flat part of the path. Much to the relief of E, with shoes that were still too small, and H, with legs that were too short.

We found a legless lizard, a snail the size of a golf ball, and lovely flowers lining all the paths in the forest. 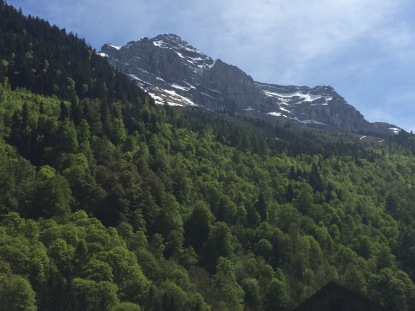 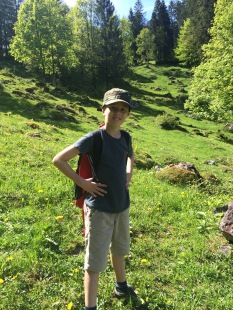 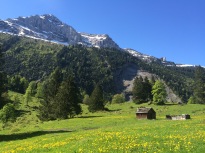 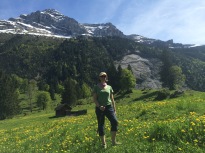 The flat part didn’t last long. Soon we were dragging our butts back up a slope that was just slope-y enough to be uncomfortable.  We came to a pasture area and was walking through listening for the tell-tale clanking of the bells that cows wear around their necks when H had had enough. Right there in the middle of the pasture he completely lost it.

With his arms pinwheeling around him he stomped around the grass shouting, “That’s IT! You. Are. TRICKING ME!! You just want me to hike up here!! There’s no LAKE up there!!! There’s no GASTHAUS!!! YOU’RE MAKING THIS UP!!! ALL OF IT!!!! YOU’RE! MAKING! THIS! UP!!!!”

He started making animal grunts and low screams as he stomped around the pasture, frightening any cows that may have been on the verge of making noise, and refused to go on.

I sent Mark and E along and I sat with H and talked him down from his tantrum.  I eventually got him walking again, but he better be getting 3 whole scoops of ice cream when he gets to the top. With sprinkles. Mommy.

We got out of the cow pasture and walked along a road with H muttering to himself. I caught words like “Smarties,” which is a candy like M&Ms, and “3 scoops,” and “chocolate.”  We came around a curve and, lo, we made it to the lake and gasthaus.

My beloved spouse and I each had a beer on the patio overlooking the beautiful lake.

Beautiful doesn’t actually cut it in this case. The beauty was not-to-be-believed.  I don’t think I am actually capable of conveying in words just how perfect and magical the view is. So here are some pictures to do it for me. 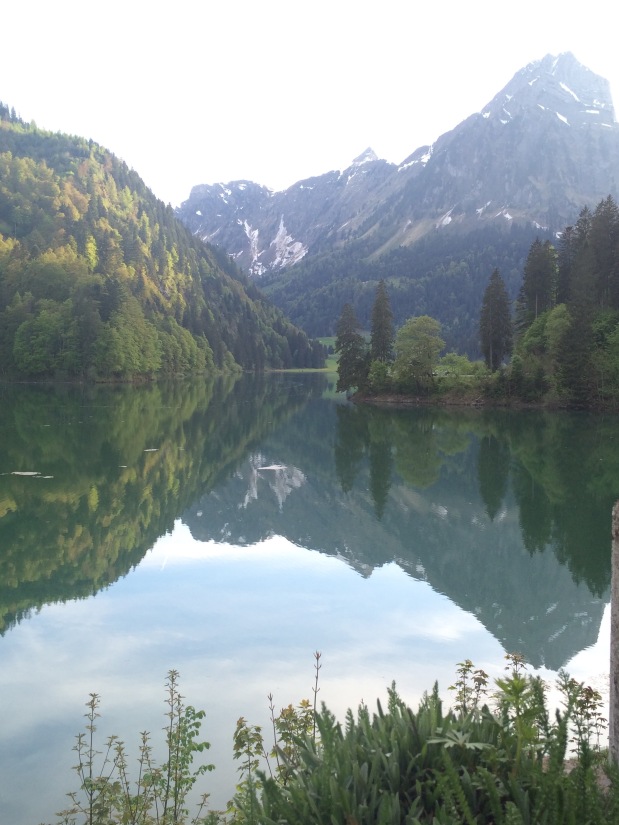 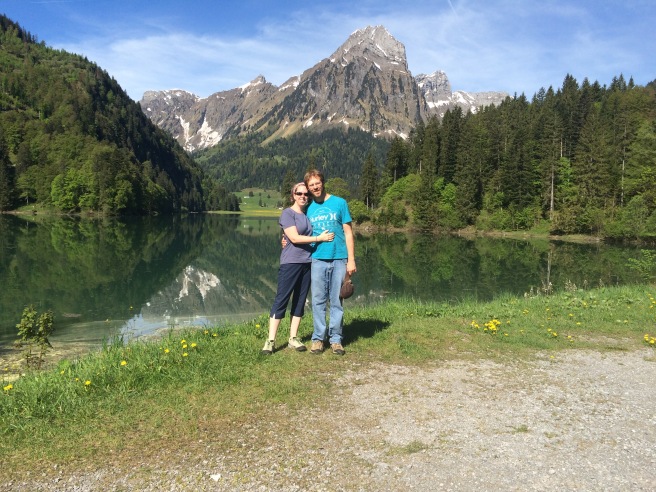 People were fishing, swimming, and boating. There were hikers with dogs bounding around the lake. There were also cyclists stopping for a snack and then turning around to go back down the road.

I don’t think I moved from our table for the rest of the evening until it was time for bed. Mark and the boys explored a bit more, but I was just fine where I was, looking at the lake, thinking about all our Swiss adventures, and drinking my beer.

We saved the most beautiful for last. Poor, Glarus. No one ever goes to see you, but they should. You are lovely.  All my friends in Switzerland should go. It’s an easy hike, just under 3 hours up and then it took us 1 hour 40 minutes to get back down. It can easily be done in a day, but I’m glad we took our time.

It’s everything I love about Switzerland.

A Walk Along the Borderlands