In the fall in America pecans start to flood into the supermarkets. I do love pecans.  Almost as much as I love pumpkin. Pecans feel very distinctly American to me. They were hard to find in Switzerland, while almonds and hazelnuts were everywhere you looked and were in just about every pastry offered in a bakery.

Pecans come up from the south, from states like Georgia, Texas, Louisiana, Kentucky, and Mississippi. The same areas, incidentally, where bourbon is distilled. I guess it isn’t unusual then that bourbon and pecans would go together in my mind. They are even kind of the same color.

And they taste great together.

If you Google “pecans and bourbon” you will find countless recipes for bourbon spiced pecans, bourbon glazed pecans, bourbon candied pecans, bourbon maple pecans, and the list goes on and on. And if you look there are also a number of recipes for bourbon pecan pie. I have come up with my own, based on the recipe a friend gave to me years and years ago. I tweaked it a bit and then spent a few trials experimenting with different amounts of bourbon, trying to come up with the the right amount for a good flavor. I wanted the bourbon to enhance the pecans and not just taste like a glass full of Blanton’s. It took me about 3 or 4 pies, much to my husband’s delight, to decide on a tablespoon and a half as “the right” amount. Of course, feel free to season it to your own taste. 😉

If you don’t like bourbon, just leave it out. It is a great recipe without it and a pecan pie is an amazingly simple pie to make.

Roll out the pie crust and place it into a 9-inch pie pan. Flute the edges and set it aside while you make the filling. 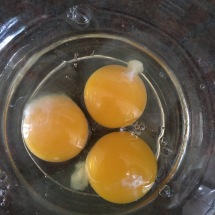 Using a wire whisk, whip together the sugar and eggs until light and fluffy. Then add the corn syrup and melted butter and whisk them together thoroughly. Add the vanilla and bourbon and gently whisk them into the mixture. 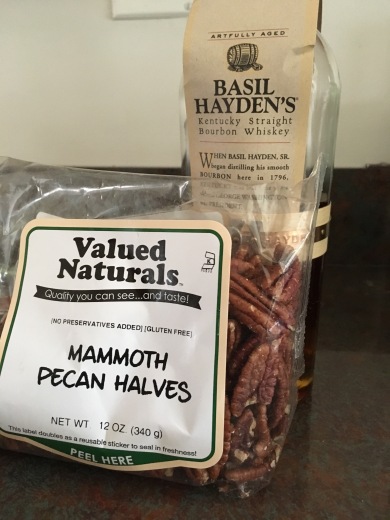 With a spatula, gently fold in the pecans until coated with the liquid.  Pour the whole lot into the pie crust you have ready and carefully place it into the oven. 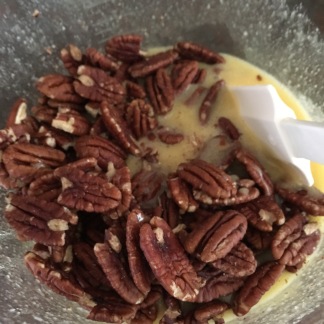 Bake for 1 hour and 15 minutes, or until center is just barely wobbly and the pecans have turned a nice dark brown.

Let it cool down until room temperature and then enjoy.

You can top it with some whipped cream or serve it with a side of vanilla ice cream or even a side of bourbon. (Although I’m told a nice cup of tea or coffee can also be satisfying. I wouldn’t know. 😉 )

One thought on “Bourbon Pecan Pie”